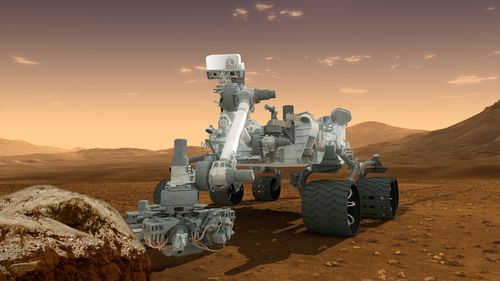 Scott McLennan, a professor of geosciences at Stony Brook University, has been selected as a participating scientist for the Mars Science Laboratory (MSL) mission with the proposal “Sedimentary Petrology at the Mars Science Laboratory Site.” McLennan is one of 30 participating scientists selected from a total of 149 proposals to NASA, and will join more than 300 scientists who will take part in the MSL mission at the Jet Propulsion Laboratory in Pasadena, California.

This is McLennan’s third Mars mission. He has been a participating scientist on the Mars Exploration Rover mission since 2002 and still takes part in the ongoing exploration by the Opportunity rover (contact with the Spirit rover was lost in 2010).  He was also a participating scientist on the gamma ray spectrometer experiment aboard the Mars Odyssey orbiter until that instrument stopped working in 2008. Although McLennan’s participation with Mars Odyssey has ended, he said, “the Odyssey spacecraft remains a familiar old friend since that spacecraft will help to relay data back to Earth from the Curiosity rover.”

“The plan for the Mars Science Laboratory mission is for the Curiosity rover, which has far greater analytical capability than did Spirit and Opportunity that were launched in 2003, to spend a full Martian year (or nearly two Earth years) exploring within the ancient 154 kilometer (nearly 100 mile) diameter Gale crater,” said McLennan.

“The primary goals for Curiosity are to evaluate the biological potential of the ancient geological environments preserved within Gale crater, to extensively investigate the geology and other planetary processes that may be relevant for understanding whether Mars was ever habitable and to characterize the radiation environment that would be encountered by any future human explorer,” he also stated.

For the first three months of the mission, McLennan will live on “Mars time” where a day is about 40 minutes longer than an Earth day. This maximizes science results from the rover but creates a grueling schedule for engineers and scientists because each day on average they must begin their work 40 minutes later than the day before. McLennan, who worked on Mars time during the early days of the Spirit and Opportunity mission said, “Living on Mars time isn’t too bad for a few days, but quickly gets pretty tiring. Fortunately, our training for the mission included lots of advice on how to manage fatigue while still keeping alert for our work. After three months, most of the scientists will return to their home institutions and operate Curiosity remotely on a schedule better aligned to living on Earth.”

McLennan, who is on sabbatical for the coming academic year, left for Pasadena on August 2 in preparation for the landing of Curiosity on early Monday morning (1:31 am EDT) August 6.  Those interested in following the landing should visit the NASA website.