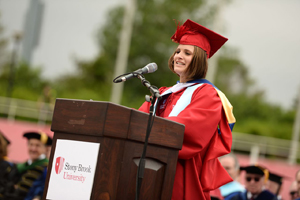 At Stony Brook University’s 53rd annual Commencement on May 24 at Kenneth P. LaValle Stadium, more than 5,600 students received their degree, joining more than 145,000 alumni around the globe.

“The class of 2013 has a special place in my heart because many of you entered Stony Brook University with me in 2009,” said Stony Brook University President Samuel L. Stanley Jr., MD, during his fourth May commencement address. “In some sense this is my graduating class, and while I did not fulfill the requirements for a Stony Brook degree, and therefore will be not be walking with you today, I do feel a very real bond with each and every one of you. I hope like me, that you have really enjoyed these four years, and learned a tremendous amount.”

During his commencement remarks, President Stanley highlighted three personal stories of graduating students. He recognized James “Zak” Szakmary (history), a 67-year old retired air traffic controller and decorated former United States Marine that served and was injured in Vietnam. Zak plans to continue his studies and pursue a Master’s in Public History; Nadia Habib (psychology major/studio art minor), a student whose story of immigration to the United States from Bangladesh at 20 months old garnered national attention; and Kevin Sackel (mathematics and physics double major/music minor), the quintessential scholar and gentleman, a 4.0 student who was awarded a Churchill Scholarship to study at Cambridge and pursue a one-year Master of Advanced Study in Mathematics.

Receiving honorary doctorates at the ceremony were Terence Netter (Doctor of Fine Arts) the founding director of SBU’s Staller Center for the Arts and a renowned artist and educator in the area of fine arts; and Nora Volkow (Doctor of Science), Director of the National Institute on Drug Abuse at the National Institutes of Health and a research psychiatrist and scientist who has pioneered the use of brain imaging to investigate the toxic effects and addictive properties of abusable drugs.

Provost Dennis N. Assanis announced the winner of the Ward Melville Valedictorian Award, the University’s most distinguished undergraduate honor named for the first chairperson of the Council of Stony Brook University. The Ward Melville Valedictorian Award goes to the graduating senior or seniors who have attained the most outstanding academic record during four years at Stony Brook. This year it was issued to three graduating seniors who received the award with a 4.00 GPA: Christine Boucher of Portland, Maine, a linguistics and French major; Katherine Chu of Woodside, Queens, political science and history major; and, Kevin Sackel of Plainview, New York, a mathematics and physics major and music minor.

Provost Assanis also announced the winners for the H. Lee Dennison Valedictorian Award, named in honor of Suffolk County’s first chief executive and presented to the graduating senior or seniors who entered Stony Brook as a transfer student, completed at least 60 credits of letter-grade work at

Stony Brook and attained the most outstanding academic record in that work. The students who received the award with a 4.00 GPA are: Sergey Moyseyenko from the Republic of Belarus, a business major with a minor in studio art; Ista Ariane Egbeto of Rockville, Maryland, a biology major specializing in developmental genetics with a minor in business management; Dimitra Hasiotis of Coram, New York, a biology major; Amanpreet Mukker of New Hyde Park, New York, a computer science major; and Tiffany Sorensen of Centerport, New York, a Spanish languages and literature major.

The student speaker, journalism major Philly Bubaris, chosen by a panel of students and faculty based on a submitted essay, shared her thoughts about her four years as a Seawolf. She said, “Stony Brook has taught us how to be forward thinking, positive, prepared and has helped define our passions. It has taught us that what we think we can do is not nearly as much as we can actually do. It also has taught us that with hard work and perseverance, we will eventually reach the light at the end of the tunnel, and that light is today.”

On behalf of the Class of 2013, Tatiana Malebranche, health sciences, presented President Stanley with the Senior Class Gift of $5,473, designated to help support Stony Brook Children’s Hospital, which offers the most advanced pediatric specialty care in the region.

To the class of 2013, Dr. Stanley noted, “Don’t forget to stay engaged with Stony Brook University. Remember the good times; be proud of your degree, and when you can, give back to help others realize their dreams. So congratulations, you now join the more than 145,000 Stony Brook alumni whose lives and work personify the mission of the University. Now go forth and prosper!”

The commencement video will be available online for the next two weeks.