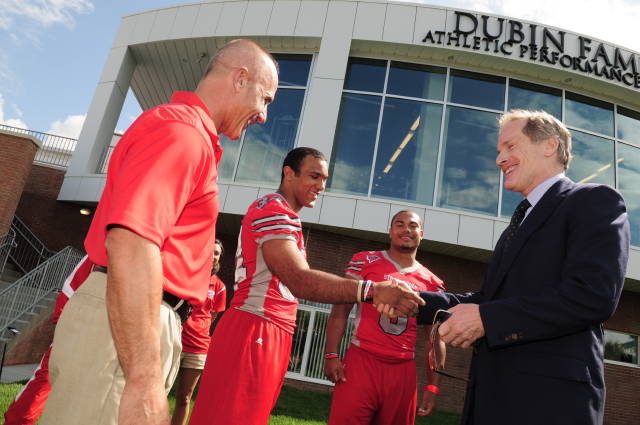 Stony Brook University officially opened its 8,000-square-foot Dubin Family Athletic Performance Center on June 6 with a dedication ceremony in honor of Glenn Dubin ’78 and his wife, Eva, who donated $4.3 million to build the world-class strength and conditioning center that will support and train Stony Brook student-athletes for success in both athletic competition and in life. The donation was the largest private gift ever made to a State University of New York SUNY athletics department.

“On behalf of my family, it’s a great honor to be back at Stony Brook and to see these great student-athletes have a top-notch performance center,” Dubin said.

“The Dubin Family Athletic Performance Center will be the hub for all of our teams’ successes as they move forward,” Fiore said.

Among the features of the new fully air-conditioned facility are 37,280 lbs. of cutting-edge strength and conditioning equipment; a state-of-the-art audio visual system for filming and training; a designated plyometric area for speed and sprint work; a nutritional oasis; a furnished office area; a large storage room; and an outdoor patio area. The facility was designed by Populous, and Fortunato Sons Contracting, Inc., served as the general contractor.

Dubin graduated from Stony Brook with a Bachelor of Arts in Economics in 1978 and was a member of the football and men’s lacrosse programs. He also was conferred the honorary degree of Doctor of Letters in May 2012 at Stony Brook’s commencement ceremony, where he served as keynote speaker.

Dubin is the co-founder and CEO of Highbridge Capital Management, a global alternative asset management company headquartered in Manhattan with offices in London, Tokyo and Hong Kong. He is a founding board member and former board chair of the Robin Hood Foundation, which fights poverty in New York City by applying investment principles to charitable giving. Dubin is also a Trustee of Mt. Sinai Medical Center, where he and his wife have funded the Dubin Breast Center to provide comprehensive integrated breast care in a patient-centered environment.

Dubin previously donated $1 million to Stony Brook in 2005 to create the Glenn Dubin Endowed Scholarship Fund, offering scholarships to students from Washington Heights, particularly to students from P.S. 132, where he attended elementary school.