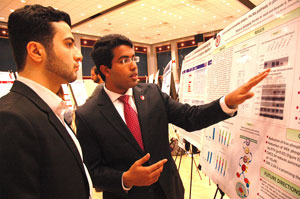 Naveen Mallangada ’17 keeps his right and left brain perfectly in balance. While he’s been tackling heady academic projects like pancreatic cancer research, his creative side has been fully engaged with repainting the Tabler Steps to resemble a very grand piano.

One look at Naveen and you know he’s headed for success. Impeccably dressed right down to the Stony Brook shield pinned on the lapel of his suit jacket, his ready smile and easygoing manner conjure up an image of the medical doctor he aspires to be someday. As a participant in the Scholars for Medicine Program he has been assured admission to Stony Brook Medical School.

The Honors College biology major from Jericho, New York, who has been on the Dean’s List every semester to date, is also a pianist – which inspired his project to refurbish the entrance to Tabler Quad.

“The steps are the major pedestrian access to the Tabler Quad and its most visible feature from Circle Road,” said Naveen. “I wanted it to be a grand entrance that represents how Stony Brook University supports both the academic and artistic potential of its students.”

His idea to transform the Tabler Steps was conceived during the 2014 fall semester in his Arts and Society class with professor Nobuho Nagasawa, who taught the class how public art can simultaneously make a statement and “activate a space.”

Naveen also sent a petition around Tabler Quad to gauge student interest in the project and, 150 signatures later, he was off and running. Ellen Driscoll of the Dean of Students championed the beautification project as well. When Director of Campus Residence Operations John Sparano secured the funding, the stair project finally took flight.

Coordinating with Tabler Quad’s administration, Naveen and his student volunteer corps worked Fridays, Saturdays and Sundays, finally completing the bottom set of steps on April 25. The railings were given a gold priming and coat and the black and white steps painted to resemble the piano keys. The project proceeded in phases, allowing for continual pedestrian access during the painting process.

“This experience has allowed me the chance to give back to the University community that fully embraced me, while providing me with the opportunity to see what students’ dedication and perseverance can really do,” he said.