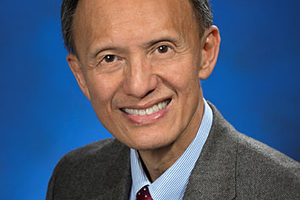 The Microscopy Society of America (MSA) has selected Yimei Zhu — a Stony Brook University adjunct professor and a senior physicist at the U.S. Department of Energy’s Brookhaven National Laboratory (BNL) — to receive the 2018 Distinguished Scientist Award for physical sciences. This award annually recognizes two senior scientists, one in the physical sciences and the other in biological sciences, for their long-standing record of achievement in the field of microscopy and microanalysis.

“I am extremely humbled by this recognition, the highest honor of the society, and to be selected among the most distinguished scientists in the field worldwide,” said Zhu, who is leader of the Electron Microscopy and Nanostructure Group at BNL. “Four Nobel Laureates received the same award before winning the Nobel Prize: Ernst Ruska in 1985, Joachim Frank in 2003, Richard Henderson in 2005, and Jacques Dubochet in 2009. I strongly feel that my award is the result of not only my hard work, persistence, and curiosity about the inner world of matter but also my collaborations with colleagues and support from Brookhaven Lab and DOE over the past 30 years.”

Zhu led the development of an ultrafast electron diffraction system that was commissioned at Brookhaven Lab in 2012 through the Laboratory-Directed Research and Development program, which promotes exploratory, mission-supported research. With an unprecedented temporal resolution 10 orders of magnitude faster than high-speed video cameras, this system is the first of its kind in the world.

“High-speed video cameras capture consecutive images at a rate less than 1000 frames per second, which is equivalent to taking a picture once every millisecond,” explained Zhu. “Our ultrafast system operates at a rate of 100 femtoseconds, or 100 quadrillionths of a second. Using a pump-probe method in which we excite a sample with laser light (the pump) and probe it with electrons while varying the time delay between the pump and probe, we can see the otherwise unobservable motion of atoms and electrons in materials.”

This capability has opened up the possibility for scientists to understand the dynamic behavior of materials—such as the intriguing transition between insulating and   superconducting phases—and to discover “hidden” states of matter beyond the solid, liquid, gas, and plasma states that are observable in everyday life.

“The bottleneck in science and technology today is the lack of materials with the desired properties for applications such as energy storage and quantum computing,” said Zhu. “Overcoming these limitations requires an understanding of the complex interactions between atoms and electrons and the exotic states of matter that are far from equilibrium. Ultrafast methods such as the pump-probe approach can provide us with the dynamic information we need to control the chemical and physical properties of materials so that we can make, for example, smaller batteries with longer cycleability and computer chips with a higher memory capacity.”