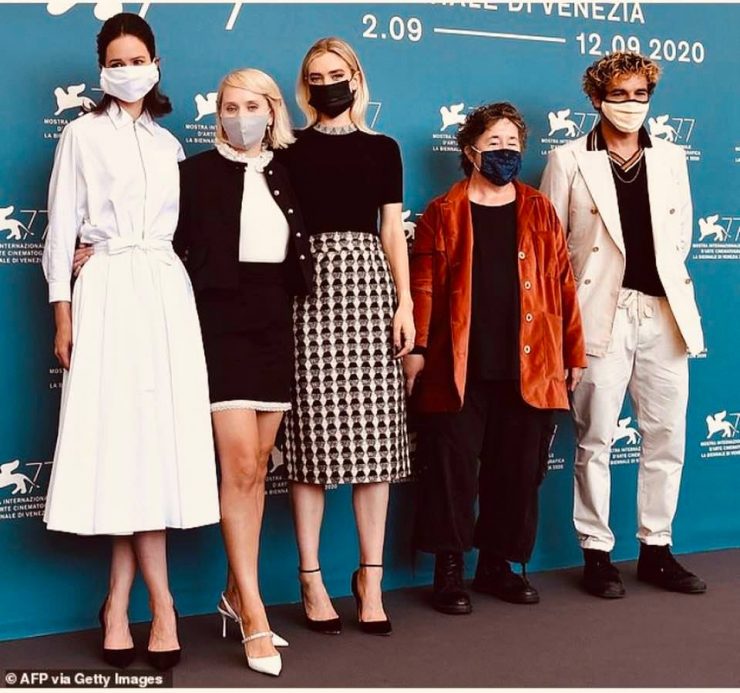 The 77th Venice International Film Festival was a memorable one for Christine Vachon, artistic director of the Stony Brook University MFA in Film program, and Pamela Koffler.

Their film, The World to Come, made its premiere at “La Biennale di Venezia,” arriving to outstanding reviews. The event also moved Vachon to post her feelings about the opening ceremony to Facebook, explaining how important films are, especially in a post-COVID world.

She spoke about the emotional address by Golden Lion award winner for Lifetime Achievement Tilda Swinton and the sight of eight festival directors taking the stage as one. “Then we saw the opening night film — and the intensity of FINALLY seeing a movie on a big screen, altogether, in the dark… I can’t even describe it.”

The film is produced by Killer Films, co-founded by Vachon and Koffler. It is directed by Mona Fastvold and stars Vanessa Kirby, Katherine Waterston and Casey Affleck. Vachon is executive producer and Koffler is a producer.

Set in upstate New York in the 1850s, the film is a love story that tells the tale of two married women who begin a relationship surrounded by a beautiful but often harsh landscape while battling hardship and isolation.

Reviews were stellar, including a five-star rating from The Telegraph. Other rave reviews came from Variety, The Guardian and The Hollywood Reporter.

From Robbie Collin’s review in The Telegraph:

“The World to Come is a ravishingly beautiful love story set in 1850s America, with painterly visuals that nod to the work of Winslow Homer and John Singer Sargent. I could stare at its dense forest landscapes all day, which is essentially what the film’s characters do. All day, all week, right through the year, until a gnawing hunger sets in and they start to crave some fresh scenery. Every heaven becomes a hell if you’re sitting beside the wrong person.”

Vachon spoke with Variety about being able to attend the Venice festival at all:

For some, there was a level of uncertainty around attendance that came down to the wire. “Up until a week before the festival, I wasn’t sure that it was going to happen,” Killer Films’ Christine Vachon tells Variety.

Vachon, in particular, would have been missed if she hadn’t been able to travel. Not only did the prolific Carol and Far From Heaven producer have a new film, The World to Come, in competition, she was also due to serve on the festival’s Horizons jury. But up until the last minute, Vachon just wasn’t sure.

“I was always going to come, but I was afraid that Italy would say, ‘We don’t want any Americans after all,’” she says. “Things change so rapidly that I wasn’t sure it was all going to come together.”

Good fortune prevailed for Vachon, though she was aware of the risks her journey entailed.

“I felt like there was a risk level I could live with,” Vachon explains. “Italy had been through what New York had been through, which was devastating. The past few months were really hard, [but] I felt that at least I was coming to a country that had been through something very similar, so was probably going to take it very seriously.”

“At the risk of sounding saccharine,” she adds, “We’re all in this together.”

At the festival’s end, Vachon posted again to Facebook, saying, “Watching 19 movies in 10 days unexpectedly completely renewed my faith and commitment to the theatrical experience.” 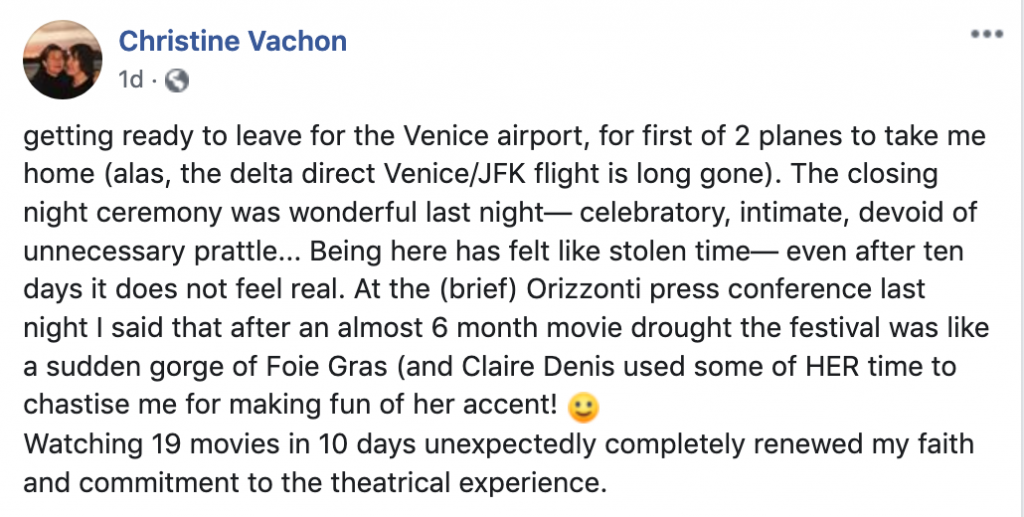