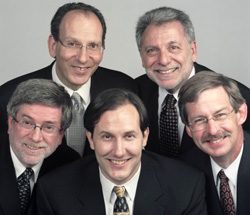 The award will be presented at CMA’s national conference banquet in New York City on January 20, with special guest speaker, composer Joan Tower. On January 19 at Symphony Space in New York City, CMA will present a concert honoring the ABQ, featuring noted performers including the New York Woodwind Quintet, trumpeters Wayne DuMaine and Joe Bergstaller, and renowned composer of brass chamber music Eric Ewazen, among others.

ABQ’s receipt of the prestigious Richard J. Bogomolny National Service Award marks only the fourth time in 35 years it has been given to an ensemble, the first time an ensemble recipient has not been a string quartet and the first time it has been given to wind or brass performers. Named in honor of former CMA Board Chairman Richard J. Bogomolny, this award is presented annually to an individual who has made a significant and lasting contribution to the chamber music field.

Founded in 1960, the ABQ is the longest continuously performing brass quintet in North America. In addition to Cobb and Powell, the other three members of the quintet are Raymond Mase, trumpet; John D. Rojak, bass trombone; and David Wakefield, horn. The ABQ has to date commissioned or premiered approximately 150 works and has released more than 50 recordings, marking the largest recorded legacy of serious brass chamber music by an ensemble.