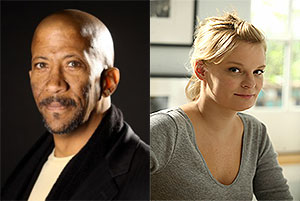 Theater of War is an innovative public health project by Outside the Wire that has presented more than 200 readings of ancient Greek plays to military and civilian communities throughout the United States, Europe and Japan as a catalyst for discussions about the challenges faced by military communities today. The program is now coming to campus — thanks to one of Stony Brook’s Presidential Mini-Grants for Departmental Diversity Initiatives — and is sponsored by the Program in Writing and Rhetoric and the Veterans Affairs Office.

Acclaimed actors Reg E. Cathey and Martha Plimpton will give a dramatic reading of scenes from Sophocles’ Ajax — a Greek tragedy about the suicide of a great and respected warrior — on Wednesday, March 4, from 3 pm to 4 pm in the Student Activities Center Auditorium. Emmy Award nominee Cathey is best known for his roles in The Wire, House of Cards and Oz, while Emmy winner Plimpton has appeared in Raising Hope, The Good Wife and The Mosquito Coast. The reading will be followed by a town-hall style audience discussion. All are welcome to attend this free event, but seating is limited.

The project is based on the idea that ancient Greek plays were a form of storytelling and reintegration for veterans by veterans, and that they have something very relevant to say to military audiences today. More than 400,000 service members, veterans and their families have participated in Theater of War performances and discussions to date.

Bryan Doerries is director and founder of Theater of War and co-founder (with Phyllis Kaufman) of Outside the Wire, a social impact company that uses theater and a variety of other media to address pressing public health issues, such as combat-related psychological injury, political torture, and the de-stigmatization of substance abuse treatment and addiction. His new translations of ancient plays about war as well as a book about the Theater of War project are slated for a September release.

Roger Thompson, an associate professor in Stony Brook’s Program in Writing and Rhetoric, applied for the Presidential Mini-Grant that helped bring Theater of War to campus. Thompson is co-author of the best-selling Iraq War memoir Beyond Duty, which confronts the effects of civilian deaths on service members, and is a senior fellow at Syracuse University’s Institute for Veterans and Military Families. He consults with universities across the country on service members’ transition from the military to higher education.

For more information about the Mini-Grant program, visit the Office of the President website.