The Vote is on to Name That Shrew 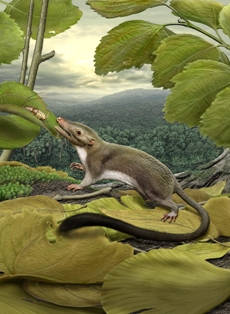 An international team of researchers led by Stony Brook University’s Maureen O’Leary, an associate professor in the Department of Anatomical Sciences and a research associate at the American Museum of Natural History, reconstructed the common ancestor of placental mammals — a small, insect-eating animal — using Morphobank, a web application for collaborative evolutionary research. The team’s work was published in a February issue of the journal Science, where the researchers revealed that, contradictory to a commonly held theory, placental mammals did not diversify into their present-day lineages until after the extinction event that eliminated non-avian dinosaurs, and about 70 percent of all species on Earth, some 65 million years ago.

Now the Museum of Natural History has teamed up with NPR’s Radiolab, hosted by Robert Krulwich and Jad Abumrad, to co-sponsor a contest to name our common ancestor, drawn by science illustrator Carl Buell. People were asked on the Radiolab website to suggest names for the original mammalian ancestor, and the field has been narrowed down from more than 1,000 entries to just 32 names, among them Grandmammal, Punky Shrewster, Vole de Mort, Furst, Placentor and Shrewbert.

You can vote here for your favorite name. There will be five rounds of voting, and the winner will be announced on April 4.

Read Robert Krulwich’s NPR blog, The Naming of the Shrew.