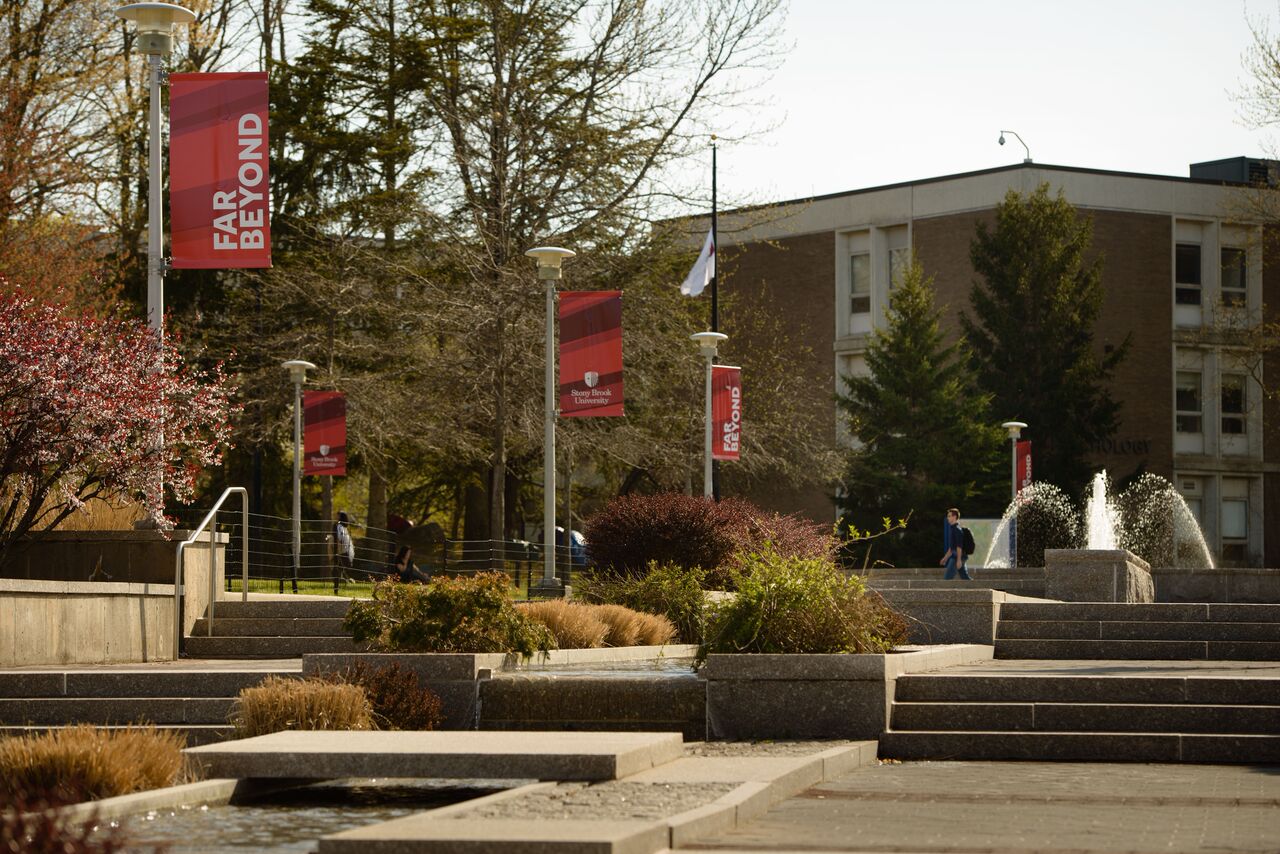 The State University of New York Board of Trustees has selected six Stony Brook faculty members for its highest honor: the rank of Distinguished Professor.

“These honors underscore Stony Brook University’s worldwide reputation as a center of thought leadership, cutting-edge scholarship and first-rate teaching,” said Stony Brook University President Samuel L. Stanley Jr., MD. “All of our six new SUNY Distinguished Professors have made remarkable contributions to their fields. I congratulate them on this well-deserved recognition.”

The Distinguished Professorship is given to individuals who have achieved national or international prominence and a distinguished reputation within a chosen field. This distinction is attained through significant contributions to the research literature or through artistic performance or achievement in the case of the arts. The candidate’s work must be of such character that the individual’s presence will tend to elevate the standards of scholarship of colleagues both within and beyond these persons’ academic fields. Receiving this rank from Stony Brook are:

William C. Chittick is an internationally renowned scholar on Islamic civilization as well as Comparative Philosophy and Religious Studies. He is author, editor and translator of 30 books and monographs, and nearly 200 articles on Islamic thought, Shi’ism and Sufism. His works have been translated into a dozen languages used in the Middle East, East Asia, South Asia, Southeast Asia and Europe. His writings have influenced all students of Islamic thought and have played an important role in changing the content and contour of philosophy education by breaking the hegemony of Western philosophy. Dr. Chittick is the recipient of three National Endowment for the Humanities Fellowships, a Fulbright Fellowship, and most recently, a John Simon Guggenheim Fellowship. He won the World Prize for the Book of the Year twice, conferred by the Islamic Republic of Iran. His fierce dedication to the pursuit of knowledge has been an inspiration for all his colleagues in the Department of Asian and Asian American Studies, where he has mentored students and scholars of Islamic studies from all over the world.

Michael Aaron Frohman has made exemplary contributions to the educational mission of the University. His discoveries are trailblazing in the field of molecular biology. Dr. Frohman co-identified a new family of signal transduction enzymes (Phospholipase D), which is critical in cell signal transduction and is thought to play roles in diabetes, neurodegenerative disease and cancer. He also developed a molecular biology method (RACE PCR or Rapid Amplification of cDNA ends), a technique used in molecular biology to obtain full-length sequence of RNA transcripts found within a cell. This technique reduced the time for cloning of cDNAs from months to days, and it had a significant impact across every life science field, with the initial citation classic report in the Proceedings of the National Academy of Sciences being cited almost 5,000 times to date. RACE-PCR continues to be used as the method of choice to clone endogenous miRNAs and has also been adapted for new uses. His most recent work is focused on the phospholipase field, where he is an undisputed international leader. Phospholipases are critical enzymes that have a role in cancer, autoimmunity and infection. Inhibition of these enzymes in pathological conditions has been a goal for many decades. Dr. Frohman’s laboratory was able to characterize a small molecule inhibitor of PLD1 and PLD2 and used it in a pivotal study published in Science (2009), which shows roles for PLD activity in polarization and migration of neutrophils. With the availability of the small molecule inhibitor, his research group has established in vivo roles for the PLD genes and potential opportunities for therapeutic inhibition. Professor Frohman has been continuously funded from the National Institutes of Health since 1992, and holds two NIH-R01 awards.

Lorna W. Role is one of the world’s leading neurobiologists. Her commitment to bridging basic science and the treatment of neurological disorders may provide new insights into control/prevention of diseases such as Alzheimer’s, Parkinson’s, depression, dementia and addiction. Dr. Role’s research has been dedicated to understanding how cholinergic signaling influences the development and plasticity of synapses, circuits and networks that underlie learned behaviors from reward to fear. Her early work focused on electrophysiological studies of the establishment of cholinoceptive synapses and on identifying mechanisms and molecular signals that controlled the subunit composition and targeting of neuronal nicotinic acetylcholine receptors to axonal domains. Dr. Role’s current research is focused on dissecting the roles of cholinergic signaling in the inscription and retention of memories, with particular emphasis on how acetylcholine contributes to the effects of highly salient experiences on learning and memory. She and her group have now shown that brief activation or inhibition of cholinergic terminal fields within the amygdala could make the difference between an indelible memory of fearful circumstances and an essentially fearless state. They are now exploring whether manipulating cholinergic signaling can preserve positive associations and, perhaps, bring back lost memories. Dr. Role has received several honors for her contributions to science, including the National Institutes of Health Director’s Pioneer Award.

Kathleen Wilson immediately won wide recognition both in Britain and the United States for her first book, The Sense of the People: Politics, Culture and Imperialism in England, 1715-1785 (Cambridge University Press, 1995). She received the 1995 Whitfield Prize for British History of the Royal Historical Society, UK, as well as the 1996 John Ben Snow Award for British Studies, North American Conference on British Studies. With The Island Race: Englishness, Empire and Gender in the Eighteenth Century (London: Routledge, 2003) she brought a new intellectual excitement to the field of British Empire Studies. Here she continued to mark out a major new kind of imperial history that brilliantly theorized an innovative way of understanding how British domestic politics and society interacted with the overseas empire. Her next work published only a year later, A New Imperial History: Culture, Identity and Modernity in Britain and the Empire, 1660-1840, editor (Cambridge: Cambridge University Press, 2004), brought together the best international scholarship in the field. Currently in press is another work by Dr. Wilson on the role of the empire in “the politics in culture” and the “culture of politics” with Strolling Players of Empire: Theater, Culture and Modernity in the English Provinces, 1720-1820 (forthcoming with Cambridge University Press, 2016). She is in the process of completing in a certain sense the “companion” study in a gender-informed understanding of empire, and in particular the cultural politics of the greatest Western one: Admirals as Heroes: Fighting Men and British Masculinity. As perhaps the most influential “gatekeeper” in her field, Dr. Wilson co-edits the key book series with Cambridge University Press: Critical Perspectives on Empire, where much of the best of her new work comes out. Professor Wilson has been recognized internationally with awards, honors and fellowships.

The Distinguished Service Professorship honors and recognizes extraordinary service. Candidates must have demonstrated substantial distinguished service not only at the campus and the State University, but also at the community, regional and State levels. Further, many candidates for appointment have rendered influential service contributing at the national and international levels. Service must exceed the work generally considered to be a part of a candidate’s basic professional work and should include service that exceeds that for which professors are normally compensated. It must also extend over multiple years and, very importantly, must involve the application of intellectual skills drawing from the candidate’s scholarly and research interests to issues of public concern. Receiving this rank from Stony Brook are:

Peter Richards Brink has served with distinction as an award-winning teacher, an outstanding contributor to the University and national community, and a successful researcher with multiple award-winning patents. He served as chair of the Department of Physiology and Biophysics for 18 years and has been a very productive faculty member in the study of connexins and cardiac stem cells, securing extensive external funding and dedicating his work to aid individuals suffering from debilitating, irreversible, and progressive diseases and disorders. As chair of the department, he has been an outstanding mentor of junior faculty and fostered faculty collaboration and growth. While the department is small in terms of the number of faculty, his leadership has positioned it as one of the top-10 funded departments in the University. He also dedicated his time to lead the creation of the first master’s program in Stony Brook’s Health Sciences Center. This program has been remarkably successful in increasing minority representation in both research and medical careers. He has been awarded both the President’s and the Chancellor’s Award for Excellence in Teaching. His research garnered the Research Foundation’s Excellence in Pursuit of Knowledge award and he has twice been awarded the Patent of the Year by the Long lsland Inventor’s Hall of Fame. All the while, he has continuously served the national science community as a permanent member on three NIH study sections over the last 25 years.

Laura J. Fochtmann is nationally recognized for her service to psychiatry. Her career is dedicated to improving the care of individuals with mental illness and to educating medical students, residents and colleagues about the complexities of diagnosis and treatment. She plays a pivotal role in the development of the American Psychiatric Association’s clinical practice guidelines, which foster evidence-based psychiatric care and are used nationally to measure the adequacy of mental health services. Since joining the Stony Brook faculty in 1988, Dr. Fochtmann has received many accolades for teaching, including Stony Brook Medicine’s highest honor for teaching excellence, the Aesculapius Award. She has also integrated her clinical skills and knowledge of biomedical informatics in adapting Stony Brook’s electronic health record to meet the unique needs of psychiatric settings. Professor Fochtmann serves on many vital committees at Stony Brook and nationally in the areas of clinical care, psychiatric research and electronic health records. For her outstanding contributions to psychiatry, Dr. Fochtmann received the New York State Psychiatric Association’s Distinguished Service Award and the Warren Williams Award of the American Psychiatric Association Assembly. She was also selected for membership in the American College of Psychiatrists and is a Distinguished Fellow of the American Psychiatric Association.

“The SUNY distinguished professor rankings are the highest honors our Board of Trustees has the opportunity to convey to faculty, making them a tremendous point of pride for us all,” said SUNY Board Chairman H. Carl McCall. “These individuals are leaders and innovators in their field, serving as excellent mentors for our students while advancing groundbreaking research and discovery in New York and around the globe. Congratulations to all of the faculty receiving this distinction.”

“The SUNY distinguished faculty are truly the best of the best,” said SUNY Chancellor Nancy L. Zimpher. “Through innovative instruction, unique research opportunities and engaging applied learning opportunities, they deliver a top quality higher education for our students that is second to none. Many thanks and congratulations to this most recent class of distinguished faculty.”