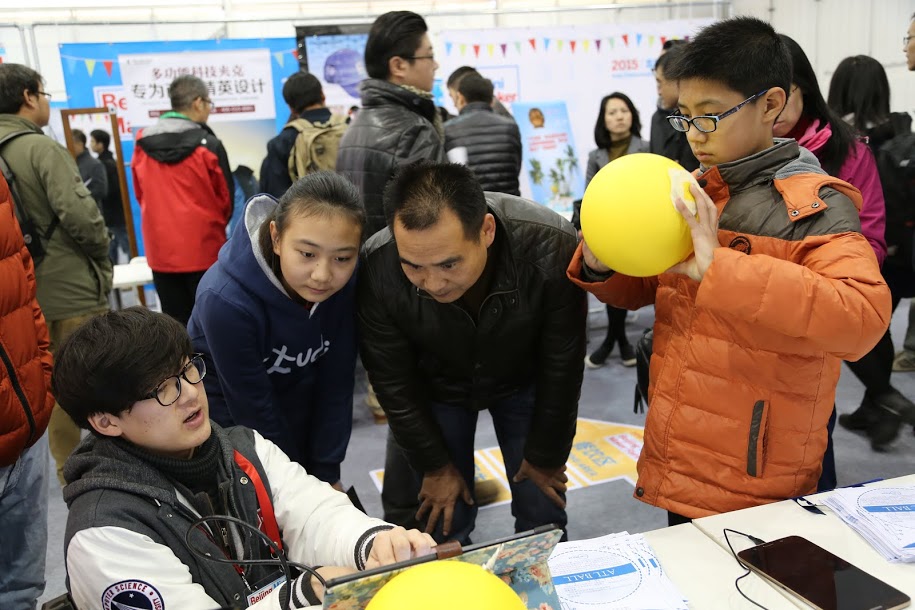 In early November the SUNY Korea Sensor Lab team attended a Maker Faire event in Beijing to demonstrate its newly developed educational product, the “AnyTime Learning Ball” or ATL Ball — an educational tool designed for early university physics classes that allows students to study in an intuitive and natural way. The idea is to demonstrate the basics of physics using a real object rather than just reading about it in a textbook.

Maker Faire is an international consortium of organizers for events held around the world that display devices or systems, including electronics, artwork and educational products invented or made by individuals or small groups. The SUNY Korea team was invited to the Beijing Maker Faire after its much-praised demonstration of the ATL Ball at the annual Seoul Maker Faire in October.

The ATL Ball is a unique educational product designed to make learning physics intuitive and fun. Embedded with sensors, the ATL Ball can be used to study kinematics, rotational motion, energy, oscillations and more by measuring time, acceleration, angular velocity and magnetic field. It transmits data to android phones or tablets so students can perform experiments in real-time. The SUNY Korea Sensor Lab team was awarded a grant from the National IT Promotion Agency (NIPA) to begin developing the ATL Ball.

This is how it works. Students read an abridged version of a physics textbook on their smartphones. While reading, students are asked to complete activities that engage them in physics concepts in the real world. During the activities, students throw, spin and kick the ATL Ball to demonstrate a variety of physics concepts. When students interact with the ball, it measures the interactions and sends the data back to the smartphone, plotting the behavior of the motion. Students will see the plot and receive scores for how well the activity was performed.

As development of the ATL Ball progresses, the Sensor Lab team hopes to incorporate its use in the physics classes offered at SUNY Korea and eventually offer it as a product for sale to high schools and universities. Attending events such as the maker faire allow the team to advertise the ATL Ball and to get advice from experts on better ways to build the ball.

SUNY Korea, a partnership between Stony Brook University, SUNY and the South Korean government, was established in 2012 as the first American university in Korea.