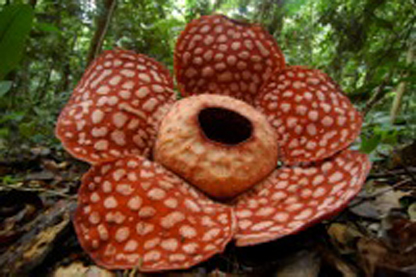 Joshua Rest, an assistant professor in the Department of Ecology and Evolution at Stony Brook University, has co-authored an article appearing in BMC Genomics, “Horizontal transfer of expressed genes in a parasitic flowering plant,” detailing the first evidence of substantial horizontal gene transfer from a host to the parasitic flowering plant Rafflesia cantleyi. Rest was co-leader of the project along with Professor Charles Davis from Harvard University.

The plant, Rafflesia cantleyi, is an obligate holoparasite dependent on its host, Tetrastigma rafflesiae, a member of the grape family, for sustenance. Rafflesias have the largest known flowers at approximately three feet across.

A team of researchers led by Rest and Davis collaborated to systematically investigate the extent of horizontal gene transfer between these two plants. By looking at the transcriptome, the transcribed products of switched on genes, they found 49 genes transcribed by the parasite, accounting for 2 percent of their total transcriptome, which originally belonged to the host. Three quarters of these transcripts appear to have replaced the parasites’ own version.

“This research suggests that this horizontal gene transfer may be important to the parasitic lifestyle of this very unusual plant,” said Rest. “These transferred genes have been integrated and are expressed in the host genome.” The transferred genes have a wide range of functions, appear to be fully operational and have become integrated into the nuclei of the parasite’s cells. Such gene transfer between species is common in bacteria, but rare in more complex organisms.

“Our study suggests that the Rafflesia genome may have evolved to mimic the genome of its host,” said Rest. “This study highlights the power of genomics to learn about the life history and evolutionary strategies of the diversity of life.”

Rest’s lab uses both bioinformatic and experimental approaches to study the evolution of gene regulation and the consequences of variation in gene expression on the fitness of organisms. He is an associate member of the Laufer Center for Physical and Quantitative Biology at Stony Brook and has published 18 articles in various publications, including: PLoS ONE, Human Molecular Genetics, Journal of Molecular Evolution, BMC Biology, Infection, Genetics and Evolution and more. He received his BS in biology from Drake University (1999) and his PhD in ecology and evolutionary biology from the University of Michigan (2004).