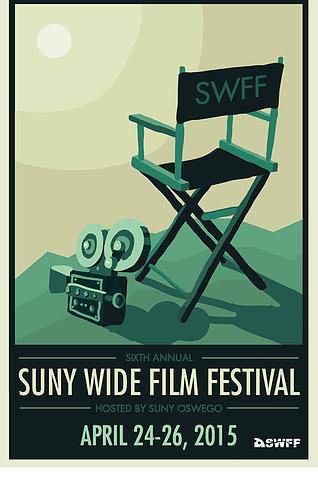 Stony Brook faculty members Associate Director Magdalene Brandeis and Producer/Screenwriter Annette Handley Chandler attended SWFF6 and participated in the festival panels. Brandeis moderated a panel on “Getting the MFA” and Chandler and Brandeis both participated in the “Breaking into the Business” panel. Signed posters of Julianne Moore’s Academy Award winning film Still Alice — produced by Killer Films co-founders and MFA in Film program director Christine Vachon and faculty Pamela Koffler — were auctioned off on the final evening of the festival.

View a slideshow from the festival

The festival celebrates film and video as a thriving field of study and provides a platform to highlight the work that best exemplifies the dedication and skill found across the SUNY system. From the traditional Hollywood narrative to animation, experimental film and video to documentary work, students and faculty are exploring personal visions through time-based image making.

The festival is a result of the vision and dedication of Phil Hastings, associate professor of Film and Video Arts at SUNY Fredonia, who founded the festival and grew it to become one of the top student film festivals in the Northeast before passing it along to SUNY Oswego. For the first five festivals, more than 400 students submitted films and videos to the competition. Selected films and videos have gone on to garner awards at other regional and national film festivals.

“We were delighted to be part of this amazing festival and we congratulate SWFF6 organizers Amy Shore and Juliet Giglio for a successful event,” said Brandeis. “We also want to thank them for their warm welcome. We were greeted with enthusiasm and excitement among the filmmakers at the festival for our new MFA in Film program at Stony Brook Southampton and Manhattan in association with Christine Vachon and Pamela Koffler of Killer Films. It’s clear that an MFA in Film will elevate the standing of all undergrad filmmakers in the SUNY system and we believe SWFF6 will be instrumental in providing the added support for all aspiring filmmakers. We look forward to a long-last relationship with the festival.”