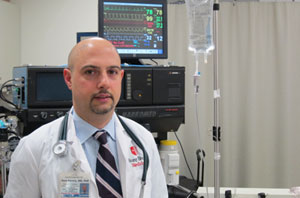 Sam Parnia, MD, PhD, Director of Resuscitation Research at Stony Brook University School of Medicine, speaks to the issue of death as a process, not a moment, and sheds light on 21st century medicine’s capabilities to increase resuscitation rates during an interview with Terry Gross, host of the syndicated program, “Fresh Air,” that aired on National Public Radio (NPR). The broadcast can be heard online here.

Gross interviewed him after reading his forthcoming book, Erasing Death: The Science that is Rewriting the Boundaries Between Life and Death, (HarperOne Publishers) scheduled to be on bookshelves on February 26.

Dr. Parnia is one of the world’s leading experts on the scientific study of death, the human mind-brain relationship, and near-death experiences. In addition to his work as a critical care physician and researcher at Stony Brook, Dr. Parnia directs the AWARE Study (AWAreness during REsuscitation). His groundbreaking research has been featured in media outlets nationally and worldwide.

“Contrary to popular belief, death is not a moment in time, such as when the heart stops beating, respiration ceases, or the brain stops functioning,” explains Dr. Parnia. “Death, rather, is a process—a process that can be interrupted well after it has begun.”

Dr. Parnia believes that hospitals around the nation can greatly improve resuscitation rates by using state-of-the-art medical and communication tools available to EMS services, physicians, and other healthcare professionals to support resuscitation efforts. He argues that universally implementing innovative techniques, such as drastically reducing the patient’s body temperature, will help to increase survival rates. Approximately half of the hospitals throughout the United States and Europe use body cooling techniques.

In Erasing Death, Dr Parnia presents cutting-edge research from the front line of critical care and resuscitation medicine that has enabled modern doctors to routinely reverse death, while also shedding light on the ultimate mystery — what happens to human consciousness during and after death. Parnia reveals how medical discoveries focused on saving lives have also raised the possibility that “consciousness” does not become annihilated immediately after death, as evidenced by the continuation of the human mind and psyche in the first few hours after death. Questions about the “self” and the “soul” that were once relegated to theology, philosophy, or even science fiction are now being examined afresh according to rigorous scientific research.

Dr. Parnia proposes and supports an intriguing notion that we are on the verge of discovering a new universal science of consciousness, which reveals the nature of the mind and a future where death is not the final defeat, but is in fact reversible.