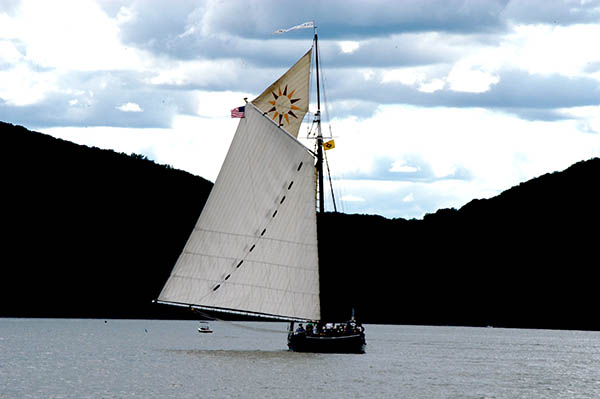 These advocates for environmental action conveyed a “cargo of concern” consisting of municipal resolutions, petitions and personal messages from residents and communities between the Hudson Valley and Washington DC to decision makers in support of fair and equal environmental policies and projections based on science.

The action was symbolic of a historic event in 1970, when Seeger and the Clearwater sailed to DC in conjunction with the inaugural Earth Day, highlighting the need for strong federal clean water protections. This time the Clearwater attempted to sail on June 19 but was forced to turn back due to bad weather. Members of the organization used alternative transportation modes to reach their destination.

The group also sought to empower the next generation of environmental stewards and scientists by providing students firsthand experience of water quality monitoring, marine debris collection, fish and plankton ecology and watershed dynamics. The Clearwater event also launched an initiative to highlight the responsibility of scientists to communicate directly with the public and policymakers.

At the forum, which took place on June 29, Levinton, a distinguished professor in the Department of Ecology and Evolution, in the College of Arts and Sciences, explained how public action over heavy metal pollution in the Hudson River resulted in the EPA taking action by declaring the river a Superfund Site and how the ensuing cleanup was extremely successful and reduced cadmium export into the Hudson River by 95 percent, which further diminished contamination of the blue crab, a major sports fishery.  He detailed how the Hudson enjoys a long history of industry beginning with a massive foundry established across from West Point, where our first New York Steam engine was cast in 1820 and where much of the ammunition and guns were cast for the North’s participation in the Civil War.

But the Nike missile system required a new innovative battery system, said Levinton, which resulted in a battery factory on the Hudson that produced the most cadmium-polluted water body in the world. The Superfund Law of 1980, supervised by the EPA and the urging of local activists and scientists who demonstrated the dangers of pumping cadmium into the Hudson at the rate of a metric ton a year, led to 75 percent reduction of cadmium in the Hudson fisheries.

“Without good laws and a powerful EPA this success would have never happened and our waterways will deteriorate rapidly,” said Levinton.

Professor Frisk, director of the Living Marine Resources Institute, in the School of Atmospheric and Marine Sciences (SoMAS), focused on sturgeon and how science is needed to understand its complexities as a species to help our regulations become more nuanced.

“Fisheries have been closed because these fish are on the endangered species list,” said Frisk. “But there are only certain times of the year and certain locations when this is really necessary. If science was understood by our policy-makers the economic losses from closed fisheries could be reduced.”

Warren, who heads up SoMAS’ Acoustic Laboratory for Ecological Studies, stressed the importance of forage fish such as Atlantic menhaden, to the Hudson River coastal ecosystem serving as prey for striped bass, ospreys and humpback whales. “There is anecdotal evidence of humpback whales increasing their usage of waters adjacent to New York City and Long Island and this may be due to an increase in menhaden in these waters,” he said.

Warren added that no organization or government entity is conducting stock assessments of the forage fish in New York waters and this would be extremely useful in assessing the health of the ecosystem.

According to Levinton, one “major victory” of the event was Congressman Sean Moloney’s announcement that oil barges are no longer able to anchor in the Hudson River.