Simone Pero: The Tale of ‘The Tale’ 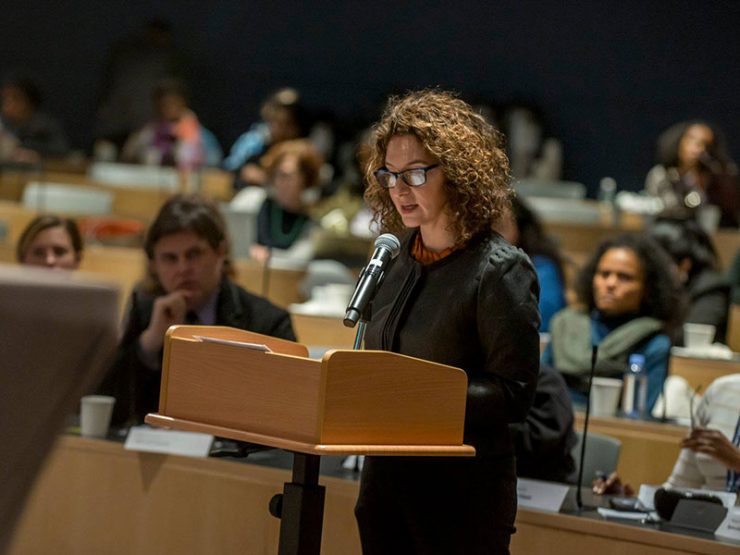 As a producer on the Jennifer Fox feature film, “The Tale,” Simone Pero, founder of For Impact Productions, has played a critical role in the film’s success in changing the global conversation around the issue of child sexual abuse (CSA).

Pero—the president of New York Women in Film and Television (NYWIFT) and part of the team responsible for creating the Stony Brook MFA in Film—responded to email questions to talk about her connection to the “The Tale”—Jennifer Fox’s cinematic memoir of child sexual abuse and the effects of trauma on memory—and the outreach efforts that have made the film a touchstone in the international movement to stop CSA.

When and how did you come to be involved with the film?

Simone Pero: Jennifer and I worked together on her six-part series, “Flying: Confessions of a Free Woman,” back around 2008. Then, a few years after that Jenn approached me about a feature film script she was developing out of “Flying,” saying: “I think there’s the potential to change the world, will you help me make that happen?” That script turned into what we know today as “The Tale.” After reading Jenn’s script—the complexity and brilliance and uniqueness of it—it didn’t take me long to decide to get involved.

Jen also had a critical understanding of the power of visual storytelling to help people and to change and deepen conversations around important social issues … and she wanted to use “The Tale” to start a new and richer global understanding in our culture around narratives of abuse and trauma. For my work as a film producer focused on social impact, this was music to my ears.

So, I came on board in the script writing stage, way before one frame of “The Tale” was shot, to develop a plan on how the film could be used beyond the screen. For example, in local communities and in fields of practice for professionals who focus on issues of sexual abuse, trauma and healing and advocates who are leading the charge to end the worldwide epidemic of child sexual abuse. Jennifer and I sensed a strong opportunity to leverage the best of our collective outreach expertise to get deep into the issues on a grassroots level and to use the filmic beauty of fiction filmmaking to capture audiences on a macro scale.

We believe the film’s fictional, visual storytelling medium has the power to articulate an emotional language and sensory experience that opens up a different and richer dialogue about topics such as memory, identity, trauma, recovery, and how child sexual abuse occurs.

As one of the producers on “The Tale,” what was your role and what were your responsibilities?

SP: I was one of 10 producers on the film. My focus was bringing in support (financial and partnerships) that would come on the journey with us … artistically, commercially, and working toward social change. This took time and all the while we were gearing up for production, which spanned more than two years even before we hit the edit room. Then, we had the great fortune to be accepted into the 2018 Sundance Film Festival which forever changed the trajectory and possibilities for this film, and our social impact mission.

At Sundance, HBO Films picked up the film’s distribution and four months later we were on air worldwide! We have now screened the film at myriad festivals globally, winning awards, all on top of the film being broadcast in 200 countries around the world. (For upcoming screenings, thetalemovie.com/screenings; for international television, thetalemovie.com/affiliates.)

What’s truly extraordinary is that HBO has supported our outreach campaign efforts to allow free screenings of the film with organizations, professional conferences, schools and universities, all toward using the film to expand and deepen our conversations and understanding of child sexual abuse.

What kind of response have you had to outreach efforts and what kind of impact have you seen?

SP: Part of the effectiveness of the film’s impact campaign stems from the fact that we started working on outreach very early on, in the script stage, which is very rare for a fiction feature film. I have been awestruck not only by the outpouring of support from viewers around the world, but also by how “The Tale” has been embraced by a wide range of experts and advocates and how it’s being used to inform practitioners’ approaches to the subject matter, such as in social work and psychoanalytic specialties.

Examples include: ways in which “The Tale” is validating the life work of a child psychologist; giving national advocacy organizations an authentic cultural reference to point to as they are fighting for funding on child abuse prevention programs in schools or pushing for extensions of statute of limitations; and providing an emotional language and a visceral proof point on the insidious nature of grooming of children and the complex effects of trauma on adult survivors.

From all sectors and all cultures and demographics, we are seeing an intense hunger and need for conversation and deeper understanding on both an individual and a systemic level. Audiences around the world are revealing to us, and most importantly to themselves, that “The Tale” has helped them express the complexity of trauma, memory, and abuse like never before. We have discovered that people want to be seen—they want to be heard—and “The Tale” allows them, perhaps for the first time, to do just that. The expression of human emotions and unpacking of deep concepts by audiences across the world is stunning!

For more information about the outreach component of Pero’s work, there are articles on the website of her production and social impact marketing company, For Impact Productions.