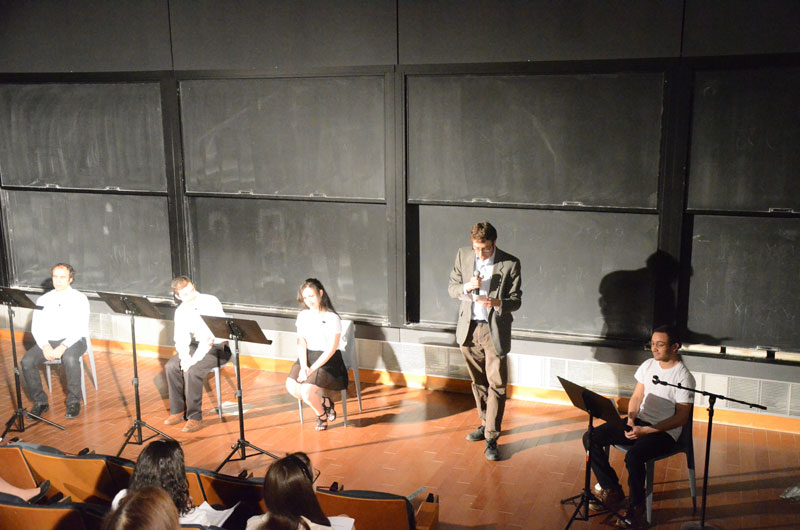 Science and art took center stage at the Simons Center for Geometry and Physics on April 10, when readings of the four 10-minute plays that won the 2012–2013 Stony Brook University Science Playwriting Competition were presented before an enthusiastic crowd that filled the auditorium.

Following a brief reception, the readings began with two plays that tied for third prize: Effect Size, written by Heather-Ayn Indelicato, staff psychologist in Counseling and Psychological Services, was a quasi-comedic look at the ethical issues surrounding test subjects in research trials. Discontinuities, by Bryan J. Field, a physicist from the Department of Physics and Astronomy, centered on the confusion and difficulty of understanding something new — in this case physicist Karl Schwarzschild’s attempts to come to terms with his black hole solution of Einstein’s equations.

Next up was the second-prize winning play — Entanglement, by Les Hunter, a PhD student from the Department of English — which retold the romantic weekend holiday during which physicist Erwin Schrödinger derived his famous equation.

The evening ended with a reading of Trust Territory, winner of the competition’s first prize. The play, written by Robert P. Crease, professor and former chair of the Department of Philosophy and historian of Brookhaven National Laboratory, was about the collision of politics and science.

Two plays that received honorable mention — With Strings Attached by Luca Mazzucato, a senior postdoctoral associate in the Giancarlo La Camera lab; and The Garden Gnome Extraction by Faisal Qayum, a senior biology and psychology major, and Christopher Miao, a senior biochemistry major — were not staged but were printed in the programs that were handed out to the audience.

The Science Playwriting Competition is the brainchild of Christopher Herzog, assistant professor at the C.N. Yang Institute for Theoretical Physics. The first competition was held in 2011 at Princeton University, where he was an assistant professor in the physics department, as part of his NSF Career Grant.

“The National Science Foundation mandates that people applying for grants have a substantial outreach component to their proposal,” said Herzog.  “Many try to fulfill that by bringing their research to local high schools and elementary schools. I thought doing something with science plays would be less typical and perhaps more interesting.”

When he arrived at Stony Brook, Herzog — who is a theoretical physicist with research interests in string theory, general relativity and quantum field theory — found that the Simons Center was putting on staged readings similar to what he had done at Princeton. He reached out to John Morgan, director of the Simons Center, and to Steve Marsh, director of Graduate Studies in the Department of Theatre Arts, about organizing a competition here.

Morgan was enthusiastic about the idea and so was Marsh, who had already produced two theatrical events for the Simons Center — Brecht’s Galileo and QED, a play about physicist Richard Feynman. “The Simons Center is always extremely supportive of exploring the intersection of science and artistic endeavor,” said Marsh.

Marsh’s help was essential to getting this competition off the ground, Herzog said.  “His collaboration gives the event a professional’s touch.”

The call for plays went out in fall 2012 and resulted in about 20 entries. Herzog said he and Marsh had two criteria in mind when judging the submissions: “The play should be of high artistic merit, and the science should be correct, important and accessible to a wide audience.”

The winning plays were announced earlier this year, and preparations for the script-in-hand readings began. “We had a decent turnout for casting considering the fact that we currently have some great productions going on in the department,” said Marsh, who also directed the readings. “Pocket Theatre is doing a production of Dog Sees God, and the SBU Main Stage opens Hamlet on April 11.”

The casts were made up of undergrads and grad students as well as a couple of professional actors from New York. Even Marsh ended up in the cast of Trust Territory, as did George Sterman, director of the C.N. Yang Institute.

Herzog would like the Science Playwriting Competition to continue. His NSF grant, which supports his research program in theoretical high-energy physics, runs out in September, and he has applied for a new one. The competition is included as a line item in the budget.

The Simons Center would like to see the competition continue as well. “One of our goals here is to bring art and science together,” said Maria Froehlich, special events coordinator for the Simons Center. “We have an art and science program, and this falls perfectly into that category. The plays are a really great way to bridge the gap between the arts and the sciences and get people together to enjoy something they might not normally enjoy.”

“This is one of the great things about Stony Brook University, “ Marsh said. “It is amazing to see how much we can learn from one another, and how much our students benefit from the view that science needs to be communicated in new and innovative ways, and also that we need to have art in this world.”

The Stony Brook University Science Playwriting Competition was made possible by the support of the Simons Center, the C.N. Yang Institute, the Department of Theatre Arts and the National Science Foundation.