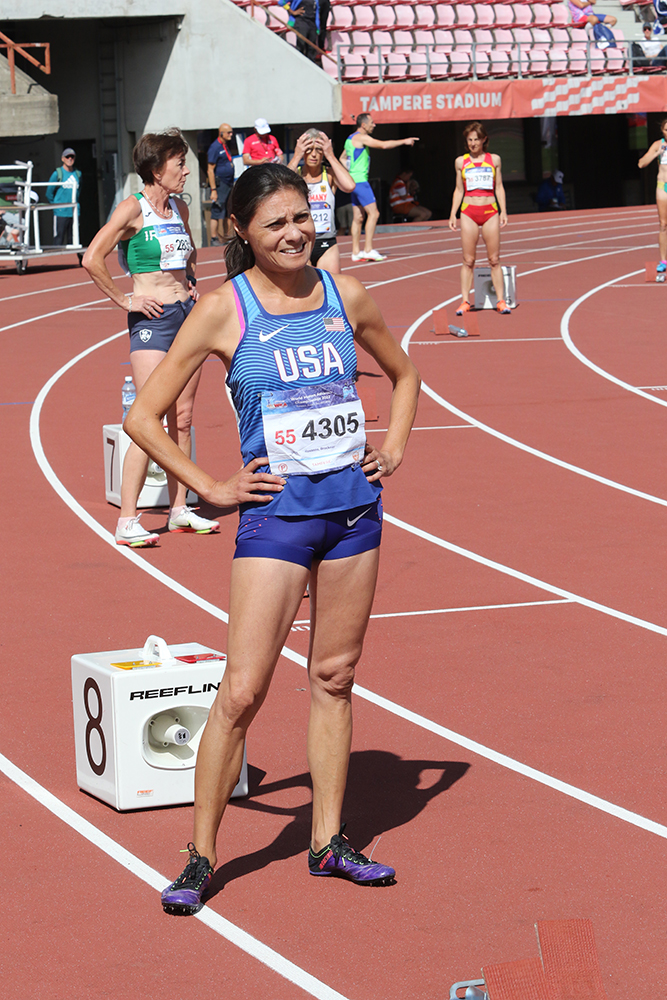 Roxanne Brockner, assistant to the director of Stony Brook’s Institute of Chemical Biology and Drug Discovery, represented the United States at the World Masters Athletics Championship in Tampere, Finland, in July and competed in the 100, 200 and 400 meters and was the starter leg for the 4 x 100 meter relay.

More than 3,000 athletes competed at the championship. Brockner, who competes in Masters Track for USA Track and Field (USATF), is part of the Long Island team, Elitefeats. She competes in the Women’s 55 age division and has been a part of Masters Track since 2016.

“I was honored to compete against the very best in the world of my W55 age division,” said Brockner. “Not only did I come in fourth place in the three events but set two new individual American records for W55 in the 200 and 400 meters with a 27.50 and 63.79, respectively. I was very happy to set the American records, especially in the 200. That record, previously run by track star Joy Upshaw, stood solid for six years since 2016. That year was my first Nationals, and I was not even close to that time. Little did I know I would be the one to break it six years later.”

Brockner was also the starter leg of the 4 x 100 meter relay for team USA, which won gold.

“Roxanne’s results at the World Championships in Finland were outstanding,” said Stony Brook University Track and Field Head Coach Andrew Ronan. “To be able to produce such quality performances on the biggest stage in the world for the sport was truly remarkable. You don’t achieve that level of excellence without a lot of hard work, dedication and passion. Roxanne spends many months of the year without fanfare working towards her goals, so it is exciting to see her rewarded for all that time and sacrifice. She represented the USA and the Stony Brook University community at the World Championships with style and class.”