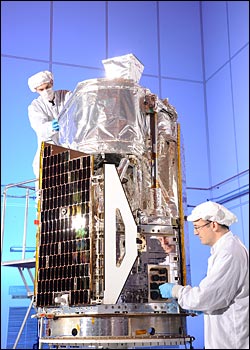 An eNews article on Brookhaven National Laboratory’s (BNL) Photon Sciences website featured the use of a Stony Brook-managed facility — the Synchrotron Topography Station, Beamline X19C, at the National Synchrotron Light Source — at BNL for the development of a NASA telescope. This facility is managed by Professor Michael Dudley, Chair of Stony Brook University’s Department of Materials Science and Engineering. Balaji Raghothamachar, Senior Research Scientist in the Department of Materials Science and Engineering at Stony Brook, is the beamline scientist for the facility.

Read the article below.

This summer, NASA is deploying NuSTAR, an array of focusing telescopes that will map the sky in the high-energy X-ray region of the electromagnetic spectrum. These maps will allow scientists to study black holes, supernovae and other cosmic phenomena in greater detail than ever before. But the new telescope array might not have been possible without the high-tech testing at Brookhaven National Laboratory’s National Synchrotron Light Source (NSLS).

NSLS is the only location in the country where scientists can do white beam x-ray topography, a type of imaging technique that uses a wide spectrum of X-ray wavelengths. The NuSTAR team needed this technique to look for flaws in the telescopes’ detectors.

“Until Aleksey [Bolotnikov of Brookhaven Lab] introduced me to white beam x-ray topography, I could never understand why one detector would work well, while another was junk,” said Peter Mao, a Caltech staff scientist. With the help of Stony Brook University beamline scientist Balaji Raghothamachar, Mao used NSLS’s x-ray vision to reveal the crucial difference.

NuSTAR uses cadmium-zinc-tellurium (CZT) detectors, a type of room temperature semiconductor, to convert photons, the high-energy light particles emitted by astrophysical objects, into electrons, which can then be recorded and studied. However, the CZT detectors’ performance can be affected by different defects, such as impurities or disorientation of the crystal sections.

Using beamline X19C, NSLS’s white beam x-ray topography station, the NuSTAR researchers could study CZT crystals in great detail without harming the actual detectors. The amount of information gathered in just 24 hours on the beamline would have taken months by any other method.

By identifying the detectors’ defects, the NuSTAR team was able to select and calibrate the best detectors for flight packaging. The first flight took place on June 26.

“This technique was so important for NuSTAR to stay on schedule,” Mao said. “I hope that it helps the crystal growers perfect their growing techniques, so that high quality CZT will be more readily available.”

This research was funded by NASA as part of the Small Explorers program.