SBU Research Will Bring Smartphone Touch Interactions to Next Level 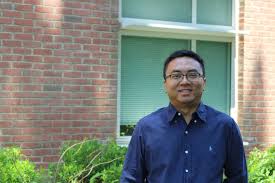 According to 2018 data from the Pew Research Center, 77% of Americans and 59% of all people worldwide own a smartphone. Xiaojun Bi, a professor in the Department of Computer Science in the College of Engineering and Applied Sciences, wants to make using that smartphone a whole lot easier.

Bi has received an award of $315,000 from the National Science Foundation to study interaction between users and touch screens with the goal of establishing new models and action laws to improve touch interaction. His research, “Establishing Action Laws for Touch Interaction,” takes interface development to the next level.

This research builds upon the success of the Finger-Fitts Law (FFitts Law) which expanded on Fitts Law (a predictor of pointing performance under different conditions) to include finger touch pointing. Bi’s research will lead to new laws and models for 1-2 dimensional target acquisition, steering, and free-form gesturing. “We aim to develop models that will predict the accuracy and efficiency of touch interaction,” said Bi.

Despite the widespread use of touch screen technologies, rules and models do not yet exist for touch interaction. Furthermore, models developed by this research will serve as a starting point to design more user-friendly interface designs for the smartphone. Part of the research will include a theory-driven, model-based comparison between older and younger adult smartphone users with touch interaction ability.

The impact of the research will be immediate for the students who are recruited to be part of the project. Additionally, Bi will reach out to Android at Google, Inc. to share the research outcomes.

Xiaojun Bi’s primary research interests are human-computer interaction, mobile computing, interactive systems, interaction techniques and theories, and user interface design. He received Google Faculty Research Awards in 2018 and 2017, and was recognized with the ACM CHI Honorable Mention Awards in 2018, 2017, 2015, and 2011. The recent work from his lab, optimized multi-letter keyboard layouts, won an ACM ISS 2018 Honorable Mention award.  He is a co-editor and co-author of the recent book Computation Interaction published by Oxford University Press.