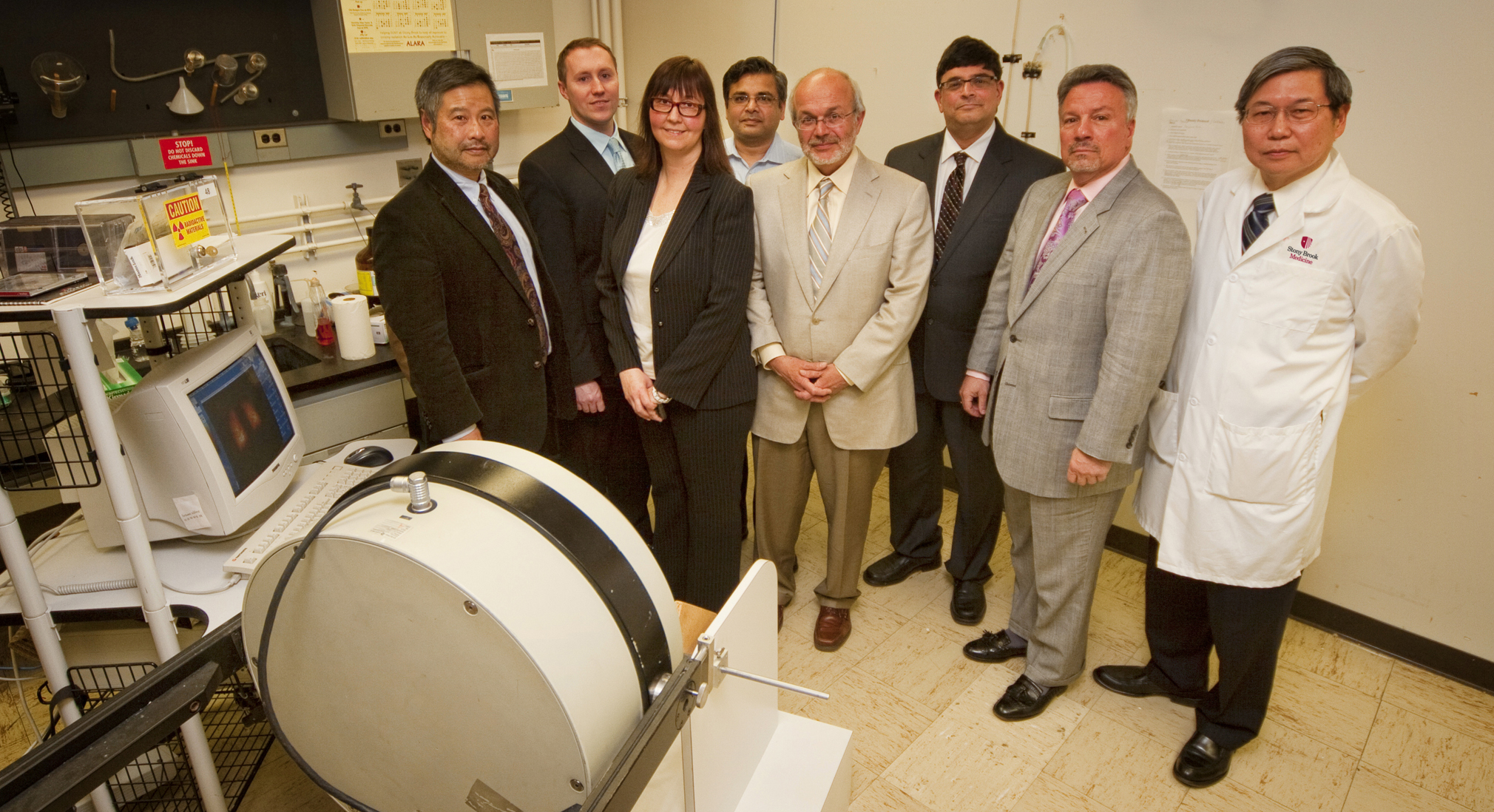 Gerald Smaldone, Professor and Chief, Division of Pulmonary, Critical Care and Sleep Medicine at the Stony Brook University School of Medicine and Rany Condos, Associate Professor, Division of Pulmonary and Critical Care, NYU School of Medicine, along with colleagues from Stony Brook and NYU, announced an exclusive license agreement with Nostrum Pharmaceuticals for the development of aerosolized interferon gamma for the treatment of idiopathic pulmonary fibrosis (IPF). IPF, a chronic and progressive form of lung disease caused by excessive formation of scar tissue in the lungs, affects approximately 200,000 Americans. With no effective treatment, the disease can lead to respiratory failure and death within three to five years of diagnosis. It is estimated that approximately 40,000 Americans die from IPF each year.

The delivery of aerosolized interferon gamma directly into the lungs has shown to be a safe and effective way to significantly reduce the levels of profibrotic regulator proteins, according to the team’s research paper “Delivery and Safety of Inhaled Interferon-y in Idiopathic Pulmonary Fibrosis” published in the April edition of the Journal of Aerosol Medicine and Pulmonary Drug Delivery. The researchers demonstrate that patients in phase 1 clinical trials diagnosed with IPF who inhaled interferon gamma in aerosol form three times per week for a period of 80 weeks had no systemic side effects and appeared to show improvement. The efficacy of inhaled interferon gamma was not determined by this trial.

In their research investigators verified the presence of the drug in the material collected on lung washes and documented no change in the level of interferon gamma in the blood during the treatment period. The report also illustrates favorable results of pulmonary function tests, including forced vital capacity (FVC), total lung capacity (TLC) and diffusion capacity to carbon monoxide (DLCO) following aerosolized interferon gamma.

Inhaled interferon gamma also has activity against tuberculosis, and may be effective in other diseases that result in scarring of the lungs and airways, such as chronic obstructive pulmonary disease (COPD). As part of this agreement, Nostrum Pharmaceuticals is sponsoring an investigator-initiated clinical trial at Stony Brook and NYU to investigate the use of interferon gamma in the treatment of COPD. This will be a phase 1 study testing delivery and safety of aerosolized interferon gamma in patients with COPD.

“We are extremely excited about this drug and its implications for the betterment of patient’s lives, especially with no available therapy,” said Nirmal Mulye, founder and Chief Executive of Nostrum Pharmaceuticals. “We are also thrilled to be part of the collaboration with the outstanding team at Stony Brook and NYU.”

“IPF represents a significant unmet need with no effective treatment,” added Ronnie Toddywala, Executive Vice President of Nostrum Pharmaceuticals. “We are excited about licensing this inhaled biologic for this and other significant conditions such as drug-resistant tuberculosis and COPD. This license represents a significant addition to our growing pipeline of drug discovery candidates as well as takes us a step closer to becoming a world leader in respiratory medicine.”