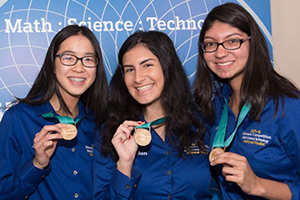 The first-place team, mentored by Associate Professor Ken-Ichi Takemaru from the Department of Pharmacological Sciences, was awarded a $100,000 scholarship to be divided among team members Arooba Ahmed of Melville, NY; Jiachen Lee of Dix Hills, NY; and Jillian Parker of Dix Hills, NY, all from the Half Hollow Hills school district. The team discovered that a specific protein not previously recognized in cell division plays a crucial role in the process and could be used to reduce the effects of degenerative diseases. For more about their research, read this article in Newsday.

“They are very talented and hard-working students who immersed themselves in research as an effective team throughout the entire summer,” commented Takemaru. “They joined the lab with an interest in cilia and the cell cycle of human cells after learning about them at school. Using various cell biological methods, they unexpectedly discovered that a protein called CCDC11, which is known to control ciliogenesis and organ laterality, plays an important role in cytokinesis, the final step of cell division. They have produced a wealth of interesting results in just two months and opened up new avenues for the lab to pursue. They truly deserve the recognition for their hard work and achievement.”

The second-place team, mentored by Distinguished Professor Miriam Rafailovich from the Department of Materials Science and Chemical Engineering, was awarded a $50,000 scholarship to team members Rachel Li of Poughkeepsie, NY; Jainil Sutaria of Ardsley, NY; and Chelsea Wang of Fort Collins, CO. The team developed a novel gel compound that could help bone regeneration in teeth by acting as a barrier to bacteria.

In addition to these top awards, another Stony Brook-mentored student, Brian Huang from Hunter High School in Manhattan, was given a $25,000 scholarship prize as a national finalist in the individual category. He was mentored by Professor Marcus Khuri from the Department of Mathematics. He developed a theorem that offers insights into the formation of black holes.

All of the students presented their research at George Washington University in Washington, DC, before they were announced as national winners. Six teams and six individuals competed in the final round of the competition for these top scholarship prizes.

For an overview of the 2017 competition and steps to the finals, see this competition schedule.

Alum J.D. Allen, who also serves as faculty advisor to the SBU student chapter of the Society of Professional Journalists, will serve a one-year term.

Hispanic Heritage Month at Stony Brook University concluded on Monday, Nov. 1, with its 32nd annual awards and dinner, and a closing ceremony that featured Alejandra Castillo ’92, who was sworn in as U.S. Assistant...

The Metropolitan Museum of Art’s cavernous halls and exhibition spaces were empty and silent when a small group of people entered the Egyptian wing with a 500-pound scientific device on a cart. They cracked open the...