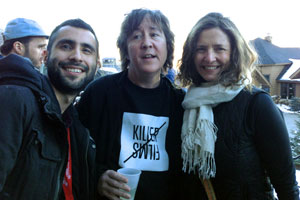 Stony Brook Southampton faculty member Christine Vachon, co-founder of indie film production powerhouse Killer Films, attended the Sundance Film Festival in Park City, Utah, to support two films she produced that were screened at the Festival. But she also spent her time spreading the word to industry insiders and her peers about the new film program she is developing at Stony Brook Southampton and at Stony Brook Manhattan.

“Part of my mission at the Festival,” Vachon said, “was to spread the word about our exciting plans for the new film program at Stony Brook Southampton, beginning with the 20/20/20 scholarship program for this summer.”

Vachon was also invited by the New York State Governor’s Office for Motion Picture and Television Development to take part in a panel discussion on “Production” co-sponsored and moderated by Steven Beer (Franklin, Weinrib, Rudell & Vassallo). The panel discussion was held at the New York Lounge in Park City, where Festival-goers stop between films for an engaging lineup of events, panels and musical guests.

The New York Lounge breakdown of the focus for the “Production” discussion focused on the founding principles of the new Stony Brook Southampton film program: “Producing independent films is an evolving art form: Successful production requires collaboration with experienced and problem-solving professionals.”

Vachon’s two films at the Festival were Magic, Magic with Juno Temple, Michael Cera and Emily Browning, and Kill Your Darlings with Elizabeth Olsen, Daniel Radcliffe and Michael C. Hall.

Kill Your Darlings received a rave review in the U.K.’s The Independent, and another boost from Entertainment Weekly movie critic Lisa Schwarzbaum, who called it one of the best movies she had seen so far at Sundance.

More significantly, Kill Your Darlings won the ultimate prize that all filmmakers are seeking at Sundance and other festivals when the producers closed a deal with Sony Pictures Classics for distribution in multiple territories.

More About the 20/20/20 Program
This summer’s 20/20/20 program will provide 20 filmmakers with fully funded scholarships to make 20 short films in 20 intense days from July 8 to 28. This impressive initiative offers one example, Vachon said, of how Stony Brook Southampton will be “turning the traditional film school model on its head,” by allowing filmmakers to learn by doing while being mentored by talented faculty with a wealth of experience and success in the rapidly changing industry.

Associate Provost Robert Reeves pointed out that “it’s the perfect time for us to add a program in digital film to our existing MFA programs in creative writing and theatre, which are gathered along with TSR Editions under the umbrella of storytelling. What’s exciting in digital filmmaking is that it’s no longer only about technology or money, but about sensibility and voice.”

For more information about the new film program or the upcoming 20/20/20 filmmaking scholarship July 8-28, 2013, contact magdalene.brandeis@stonybrook.edu.