Samir Das Named Chair of the Department of Computer Science 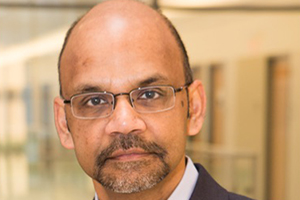 Samir Das, who has served as associate dean for research for the College of Engineering and Applied Sciences since 2016, has been appointed chair of the Department of Computer Science following a competitive national search. Das was named interim chair of the Department in August 2017. Previously, he was a division director in the Center of Excellence in Wireless and Information Technology (CEWIT) as well as the graduate advisor in the Computer Science Department.

Das is a professor in the Department of Computer Science, where he has been a faculty member since joining Stony Brook in 2002. His research interests are in wireless networking and mobile computing, and he has co-authored more than 120 peer-reviewed articles on these topics, mostly with his graduate students. He is a co-author of the widely used AODV protocol used for routing in ad hoc wireless networks. According to Google Scholar, the number of citations to his work exceeds 45,000, making him one of the most cited authors in his area. Das has been a PI or co-PI of extramural research grants and contracts worth more than $14 million since coming to Stony Brook. He is a past NSF CAREER award winner. He chaired technical program committees of premier conferences in the area of mobile computing and served on the editorial boards of several top journals in computer networking.

On campus, Das undertook several leadership positions playing a leading role in CEWIT from the days of its early planning. He also served as one of its division directors since its inception. In his role as associate dean of research, he helped synergize the college’s research endeavors along several strategic thrust areas, and establish critical proposal development support and new seed funding initiatives.