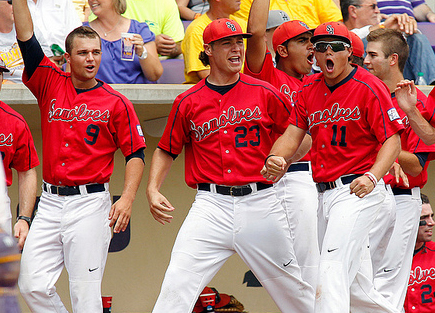 The Village Times Herald has named Stony Brook University President Samuel L. Stanley Jr., MD, “Man of the Year” for 2012 and four faculty members as “People of the Year,” including Josephine Connolly Schoonen in Health; Dr. Henry Woo in Medicine; Dr. Lawrence Hurst and Maria Badalamente in Science; and the Stony Brook Seawolves baseball team as “People of the Year in Sports.” Stony Brook University employee Charlie McAteer was also recognized as “Man of the Year in Civics.” Stories on their impact on the University and community are featured in the December 27, 2012 edition of The Village Times Herald.

Dr. Stanley, a physician, scientist and leader, was chosen as “Man of the Year” for 2012 for his hard work in making “the medical school, hospital and the university the best facilities of their kind on Long Island.” In The Village Times Herald article, “He has taken this university to great heights,” Dr. Stanley is credited with attracting top-notch researchers and funding for that research to Stony Brook, and for expanding the school’s programs and the hospital’s services. The publication also cited his work with economically disadvantaged students, for which he and his wife, Ellen Li, MD, PhD, donated $125,000 for an Endowed Scholarship in the Stony Brook University School of Medicine, which has been matched by the Simons Foundation Matching Gift Challenge Grant for an overall impact of $250,000.

In addition to his duties as President of Stony Brook University, often referred to as a flagship of the SUNY system and one of only 62 members of the prestigious Association of American Universities, Dr. Stanley serves as the Vice Chairman of Brookhaven Science Associates (BSA), an organization that manages Brookhaven National Laboratory for the U.S. Department of Energy (DOE) Office of Science; he is Chairman of the National Science Advisory Board for Biosecurity which advises the U.S. government on issues related to the communication, dissemination and performance of sensitive biological research; and has accepted an appointment to a three-year term on the Board of the Association of Public and Land–grant Universities (APLU).

Prior to his arrival at Stony Brook in July of 2009 as the fifth University president, Dr. Stanley served 25 years as a physician-scientist and educator and Vice Chancellor for Research at Washington University in St. Louis. During his time as a biomedical researcher and Vice Chancellor for Research there, Dr. Stanley distinguished himself as one of the top recipients of support from the National Institutes of Health (NIH) for his research focusing on enhanced defense against emerging infectious diseases. He is an expert in the biological mechanisms that cells employ when responding to infectious agents such as parasites, bacteria, and viruses, a process commonly called the inflammatory response.

“Man of the Year in Medicine,” Dr. Henry Woo, Professor of Neurosurgery and Radiology at Stony Brook University School of Medicine and Director of the Cerebrovascular Center at Stony Brook University Hospital, was selected, according to The Village Times Herald article for “his internationally known work as a practicing physician, clinical researcher and developer of medical devices.” Dr. Woo is a practicing neurosurgeon specializing in all types of cerebrovascular and endovascular neurosurgery, as well as stereotactic radiosurgery. He is a world expert on the treatment of aneurysms and vascular malformations of the central nervous system, and offers unique expertise in dealing with complex neurosurgical problems.

The Stony Brook University Seawolves baseball team earned the distinction of “People of the Year in Sports,” for their magical run to the NCAA College World Series (CWS). The Village Times Herald article cites the team for its “gutsy playing and team spirit that united campus and community.” The Seawolves, led by head coach Matt Senk, had their most successful season in history with 52 wins and a #7 national ranking en route to their exciting journey all the way to Omaha, Nebraska, for the CWS.

Chosen as “Woman of the Year in Health,” Josephine Connolly Schoonen, PhD, RD, Assistant Clinical Professor of Family Medicine and Executive Director of the Nutrition Division at Stony Brook Medicine, was selected and highlighted in The Village Times Herald article for her dedication to “educating people about what it means to eat right.” She conceived and nurtured the idea of the Stony Brook Heights Rooftop Farm to provide organic herbs and vegetables, which supplements nutrition and food offerings to hospital patients. The farm, located on the roof of the fourth floor of the Health Sciences Tower, also provides a learning laboratory for Nutrition and Sustainability Studies students.

Dr. Lawrence Hurst and Marie Badalamente, PhD, were selected as “People of the Year in Science,” for their work in finding a treatment for Dupuytren’s contracture, a painless thickening and contracture of tissue beneath the skin on the palm of the hand and fingers that twists the fingers into the palm, limiting hand function. Professor Badalamente, Department of Orthopaedics, and Dr. Hurst, Professor and Chairman, Department of Orthopaedics, Stony Brook University School of Medicine, were cited in The Village Times Herald article for finding a way to dissolve the extra protein by injecting patients with a collagen-eating enzyme; for their work that led to a new drug (collagenase clostridium histolyticum or CCH); and for giving Dupuytren’s patients a successful alternative to surgery. The team is also working with Edward Wang, MD, Associate Professor of Orthopaedics, Division of Shoulder, Elbow and Hand Surgery at Stony Brook University, on developing additional treatment options for CCH, including using it to treat Frozen Shoulder syndrome.

Charlie McAteer, a long-time Stony Brook University employee in the Office of Capital Planning, has been recognized as The Village Times Herald “Man of the Year in Civics,” for his work in the community on the Greenway Trail, a corridor of protected open space established for recreation and conservation between Setauket and expanding westward to Port Jefferson, NY. The Village Times Herald article states that Mr. McAteer, the Chairman of the Friends of the Greenway Trail, championed the project, working closely with the community to garner their support and with all levels of local government to secure funding and permits for the project.