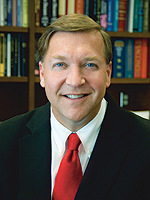 Stony Brook University President Samuel L. Stanley Jr., MD, has been elected Chair of the Universities Research Association (URA) Council of Presidents for 2014. URA is a consortium of 88 leading research-oriented universities with members primarily in the United States, and also in Canada, Italy, Japan and the United Kingdom. The non-profit URA corporation was founded in 1965 for management and operation of research facilities in the national interest.

As Chair of the Council, President Stanley will lead URA’s governing body. The Washington headquarters office of URA coordinates the activities of the Council and the Board of Trustees, and is responsible for oversight and governance of URA’s enterprises and for corporate relations with the Federal government, industry, academe and the general public.

“I am honored to be elected as Chair of the URA Council of Presidents,” said President Stanley. “I look forward to working with URA’s leadership in their important role in the management of Fermi National Accelerator Laboratory, an absolutely vital resource for particle physics research.”

From 1967 to 2006, URA was the prime contractor to the Department of Energy for the creation and operation of Fermi National Accelerator Laboratory near Batavia, Illinois. In 2007 URA partnered with the University of Chicago to form Fermi Research Alliance, LLC, which now holds the Fermilab contract. Continuing accelerator upgrades and new experiments enable Fermilab to remain a global center for research at the frontiers of physics in such areas as the search for the Higgs boson, evidence for a new family of supersymmetric particles, the search for extra dimensions in the universe and the exploration of neutrino properties. Fermilab is also a major center for research in particle astrophysics and related astronomical sciences.

On behalf of the U.S. participants in a collaboration of scientists from some 17 countries, URA received funding from the Department of Energy and the National Science Foundation for the U.S. share of the $50 million Southern Hemisphere Array of the Pierre Auger Cosmic Ray Observatory in Argentina.