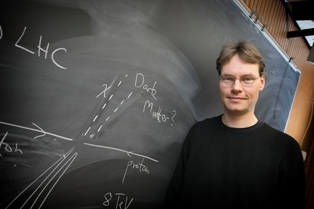 Rouven Essig, PhD, an assistant professor at the C.N. Yang Institute for Theoretical Physics and the Department of Physics and Astronomy at Stony Brook University, has been selected to receive a Sloan Research Fellowship from the Alfred P. Sloan Foundation. He is one of 126 awardees from 61 colleges and universities in the United States and Canada chosen for this prestigious honor, which comes with a $50,000 two-year fellowship.

Essig was selected based upon his distinguished performance and potential to make substantial contributions to physics. The Sloan Foundation recognizes Sloan Fellows as “rising stars” and the “next generation of scientific leaders.” He joins the ranks of 62 other Sloan Research Fellows from Stony Brook University who have received this honor before him.

“I am excited to be recognized with a Sloan Research Fellowship,” said Essig. “This fellowship will help me support the training of a graduate student, which will greatly aid my research program.”

Essig’s research program, broad in its scope but specific in its goals, is to maximize the opportunities to understand and discover the fundamental constituents of matter and their interactions. His research involves particle physics at the cosmic, intensity and energy frontiers with two broad goals: to develop the theoretical implications of the data being collected at dark matter detection experiments, at high-intensity beam experiments and at the Large Hadron Collider in Switzerland; and to generate new ideas for experiments that can further understanding of the fundamental constituents of nature.

“I congratulate Rouven on this outstanding achievement,” said Provost Dennis N. Assanis. “His broad research program embracing the intensity, cosmic and energy frontiers is at the forefront of particle physics research and the search for new laws of physics. We look forward to great discoveries from him in the future.”

“The Sloan Research Fellows are the best of the best among young scientists,” said Paul L. Joskow, President of the Alfred P. Sloan Foundation. “If you want to know where the next big scientific breakthrough will come from, look to these extraordinary men and women. The Foundation is proud to support them during this pivotal stage of their careers.”

Fellowships are awarded in eight scientific fields – chemistry, computer science, economics, mathematics, evolutionary and computational molecular biology, neuroscience, ocean sciences and physics. Since the program’s inception in 1955, the Sloan Foundation has awarded nearly $120 million in support of more than 4,200 early-career researchers. Administered and funded by the Sloan Foundation, the fellowships are awarded in close cooperation with the scientific community. To qualify, candidates must first be nominated by their peers and are subsequently selected by an independent panel of senior scholars.

Sloan Fellows may use their grants to pursue whatever lines of inquiry are of most interest to them, and they are permitted to use fellowship funds in a variety of ways to further their research including for such purposes as equipment, technical assistance, professional travel, trainee support and any other activity directly related to the Fellow’s research. Funds are awarded directly to the Fellow’s institution.