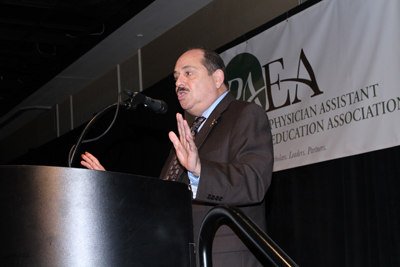 Paul Lombardo, chair and clinical associate professor of the physician assistant (PA) program at Stony Brook University, is the 2011 recipient of the Physician Assistant Education Association (PAEA) Outstanding Achievement Award. This award honors an individual who has provided sustained, exceptional service or leadership to PAEA or who has contributed to the advancement of the PA profession in other ways, through scholarly activity, teaching, or as an advocate for the profession. The award was presented by PAEA at its recent Annual Education Forum in New Orleans.

Described by colleagues as an extraordinarily bright and no-nonsense person, Lombardo is the only individual to date to have served as president of three professional PA organizations—the American Academy of Physician Assistants, the Physician Assistant Foundation, and PAEA. He has helped facilitate change on both the local and national levels. His achievements include numerous presentations, many published articles, and grant/research awards totaling more than $3 million to date. Most recently, he chaired Stony Brook University Medical Center’s Haitian Relief Task Force. He has also been the recipient of the Master Teacher Award from PAEA and the Outstanding Educator of the Year Award from the New York State Society of Physician Assistants.

Patrick Knott, chair and professor of the PA program at Rosalind Franklin University in Illinois, credited Lombardo with spearheading the movement of PAEA to independent management, emphasizing that Lombardo has been instrumental in “pushing the organization forward with his innovative ideas and provocative statements.”

Colleagues cite Lombardo’s commitment to identifying and nurturing future leaders, noting that he has mentored thousands of students. He is also credited with taking the first steps to support a student’s vision to establish an honor society for PAs, Pi Alpha, now with more than 2,200 members.

In his acceptance remarks, Lombardo said that the education of students is a noble task as well as a challenge. He also thanked his colleagues, saying that one of the most important things he has learned over the years is the value of surrounding himself with people who are smarter than he is.