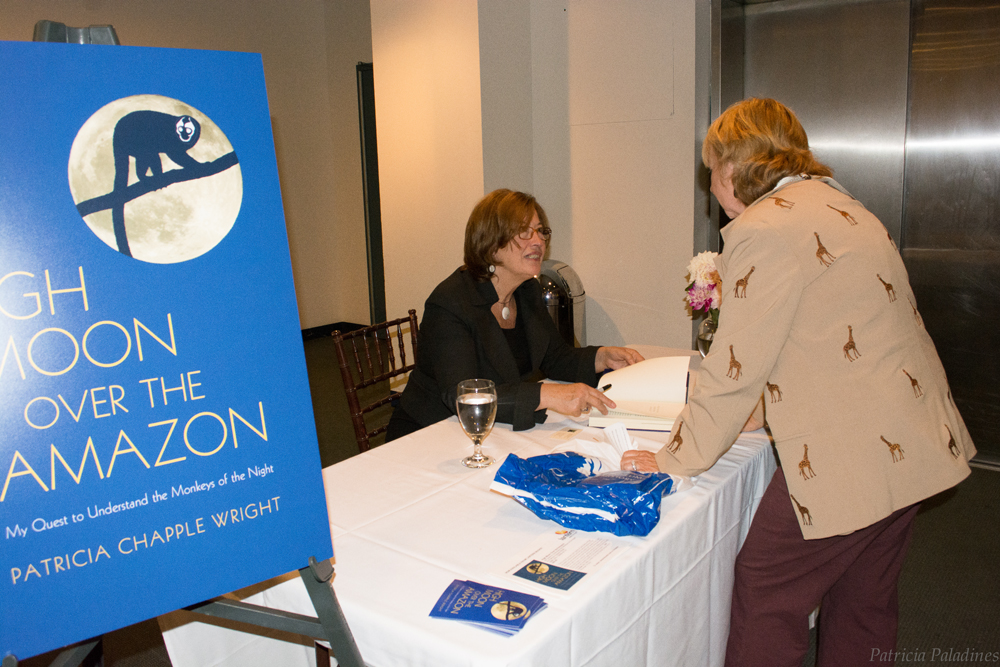 Primatologist Patricia Wright marked the release of her memoir, High Moon Over the Amazon: My Quest to Understand the Monkeys of the Night, with a lecture and book signing at the American Museum of Natural History in New York City on October 15. She is Professor of Biological Anthropology in the College of Arts and Sciences at Stony Brook University and founder and Executive Director of Centre ValBio, a modern research campus in the rainforest of Madagascar that is operated by the Institute for the Conservation of Tropical Environments.

“It’s a wonderful moment to see my story have the opportunity to inspire young people, especially young women, to follow their dreams and accomplish what they love to do most,” said Wright.

Professor Wright is a world-renowned expert on lemurs and a conservationist who spearheaded the establishment of Ranomafana National Park in Madagascar. But before studying the lemur, Wright was intrigued by Aotus, the owl monkey or “monkey of the night.” High Moon Over the Amazon details her remarkable journey, beginning as a wife and mother in 1960s New York City, travelling to the Amazon with her daughter to study primate behavior in the wild, and developing into the accomplished scientist she is today.

“This is a book you must read. Against all odds Patricia Wright succeeded in observing the previously unknown behavior of the mysterious and enchanting little owl monkey, the ‘monkey of the night.’ With the skill of a born storyteller she describes hair-raising adventures deep in the Amazon rainforest and the problems of raising a child far from civilization. You will laugh and cry and marvel at the determination, courage and scientific integrity of this amazing woman.” — Jane Goodall, PhD, DBE, Founder of the Jane Goodall Institute and UN Messenger of Peace.

Wright has received many honors for her conservation work in Madagascar, among them the prestigious “Chevalier d’ Ordre National” (National Medal of Honor of Madagascar) in 1995 and the Officier d’ Ordre National in 2004 from the President of Madagascar. She was elected to the prestigious American Philosophical Society in June 2013. Wright is the subject of an upcoming documentary, “Island of Lemurs: Madagascar,” in Spring 2014.

On-Campus Book Signing
Professor Wright will give a short presentation followed by a book signing at the University Bookstore in the Melville Library on Wednesday, October 23, from 1 pm to 2 pm.