Office of Veterans Affairs Brings The Murph Challenge to SBU 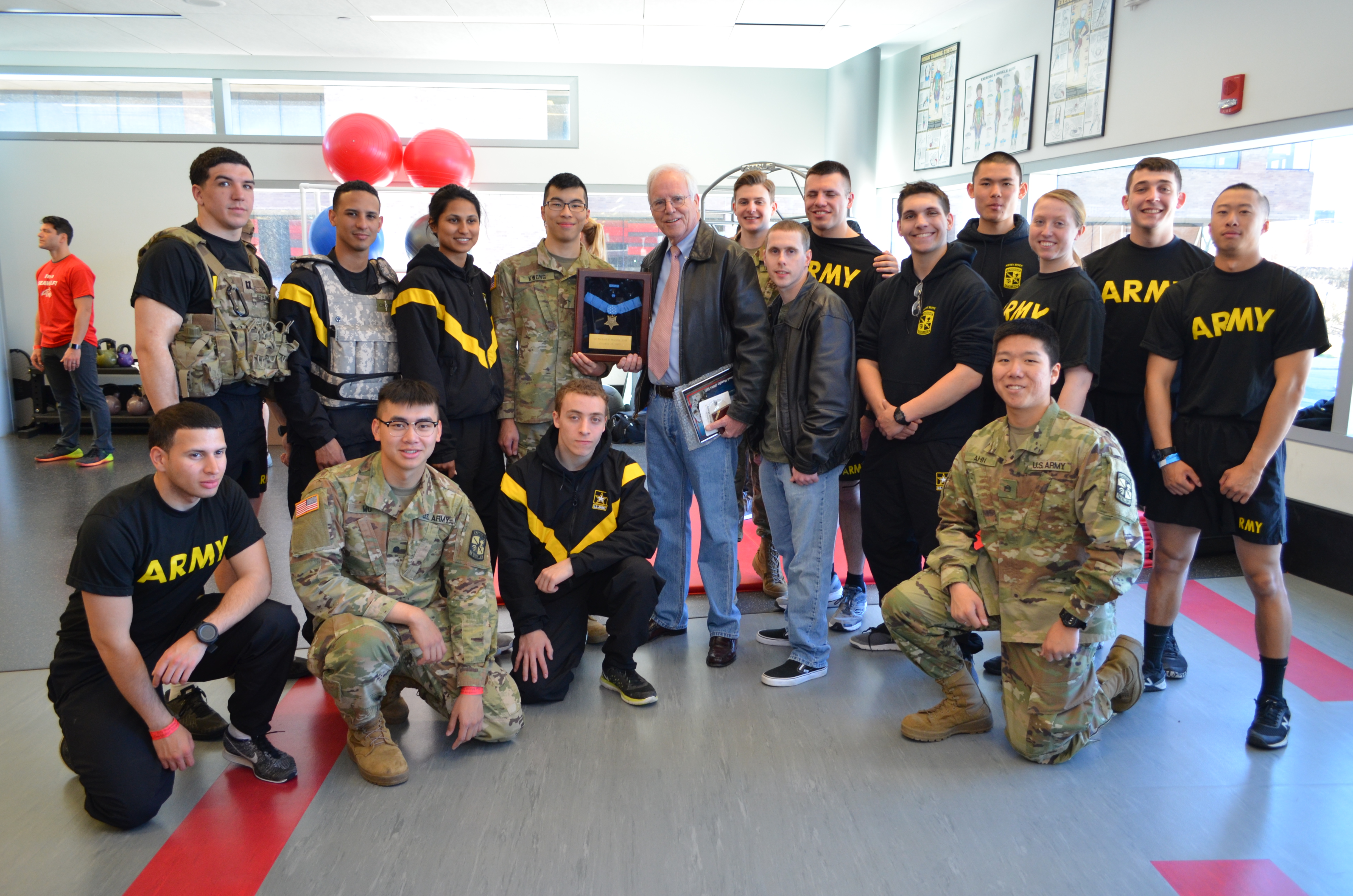 The Office of Veteran Affairs hosted the Murph Challenge at the Stony Brook Walter J. Hawrys Recreation Center on Saturday, April 21. The intensive training regiment consisted of a 1 mile run followed by 100 pullups, 200 pushups, 300 squats and a second mile run, all while wearing a 20 pound vest or body armor.

The challenge is named for Lieutenant Michael P. Murphy, a Navy SEAL who selflessly gave his own life in combat to save the lives of his team. He was the officer-in-charge of a four-man SEAL element tasked with finding a key anti-coalition militia commander near Asadabad, Afghanistan. For his heroic act of sacrificing his life, Lt. Murphy was posthumously awarded the Congressional Medal of Honor, the highest US military distinction. The Long Island native of Patchogue was known to routinely complete this challenge.

“They say that somebody that’s in really good shape does it in about 45 minutes to an hour,” said Coordinator of Veteran Student Services, Pamela Pfeil. “Michael’s everyday time was around 35 minutes and the best time he ever did was 28 minutes.”

This event was brought to the University by the Office of Veterans Affairs, but according to Pfeil, it could not have happened without the advocacy and support of Kate Larsen, Assistant Vice President of Accounting and University Controller.

The Murph Challenge is an annual Memorial Day tradition, completed globally in honor of this true hero. Since classes are not in session on Memorial Day, the Office of Veteran Affairs chose to hold it before final exams. The tradition, however, is not just a grueling workout, but also the primary fundraising vehicle of the LT. Michael P. Murphy Memorial Scholarship Foundation, which was founded in 2007 by Michael’s parents, Dan and Maureen Murphy, along with his brother, John. The Foundation has grown exponentially, to the point that they are now awarding over 27 scholarships each year.

“The Murph Challenge is something for people who are physically fit or like to physically challenge or test themselves and also to raise awareness for our veterans,” said United States Army veteran, Office of Veterans Affairs Student Assistant and Biology major Marquis Cunningham. “Cadets from ROTC and civilians were very motivated to participate. There were non-vets, some gym goers and physically fit people who just wanted to try their luck and see how fit they were as well as support the cause.”

The LT. Michael P. Murphy Memorial Scholarship Foundation is funded through donations and proceeds from the Murph Challenge, a Forged annual fundraiser. Since 2014, Forged has raised nearly $1,000,000 for the foundation helping to provide scholarships to exceptional individuals while working to keep Murphy’s service, sacrifice and legacy alive.

2018 marks a special year for the Murph Challenge, in which the foundation has the specific goal to raise a minimum of $250,000 in order to begin construction on the LT Michael P. Murphy Navy SEAL Museum/Sea Cadet Training Facility in Long Island, NY.

A very special moment in the event was provided by Lt. Murphy’s father, Dan, who attended the campus event. He showed a video they had created about Michael’s life and brought his Congressional Medal of Honor for attendees to appreciate.

About 45 people, consisting of veterans, civilians and ROTC cadets, enthusiastically participated in the challenge, including Interim Vice President for Student Affairs and Dean of Students Rick Gatteau.

“We were thrilled to host the Murph Challenge at Stony Brook. I am grateful to the Office of Veterans Affairs and several campus partners for their hard work in bringing this special event to our University,” said Dean Gatteau. “This event served as an important reminder of the ultimate sacrifice Lt. Murphy and so many others have made so that we can enjoy freedom in the United States. This is something we often take for granted, so Saturday’s event was one small way to give back and recognize their incredible bravery and heroism.”