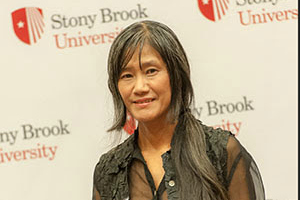 Department of Art Professor Nobuho Nagasawa recently received the New York City Public Design Commission’s highest honor at the 34th Annual Awards for Excellence in Design, held at City Hall. Professor Nagasawa was honored for her permanent public art “Luminescence,” the installation of which is currently in progress at the newly developed Peninsula, Hunter’s Point South Waterfront Park on the East River in Queens, New York.

Designed to enhance a new public waterfront park situated on approximately 30 acres of prime East River property in Long Island City, “Luminescence” consists of seven sculptures that emulate the seven phases of the moon. Each moon sculpture is cast in white Portland cement in a 6-foot diameter domed mold.

“In Japan, we celebrate an ancient custom, a day to pay tribute to the moon,” Nagasawa said. “In this time of environmental crisis, I wanted to address the intrinsic values in nature.”

The moon mold is milled using NASA topographic survey data collected by the Lunar Reconnaissance Orbiter (LRO), to form a stylized but accurate representation of the moon’s surface — a pattern of craters, mountains, and valleys. The sculptures absorb sunlight during the day, and as dusk approaches, the seven phases of the moon are emitted by a soft blue glow. Each phase is illuminated by a phosphorescent material integrated into the surface of the domed shapes.

Upon her first evaluation of the installation site, Professor Nagasawa determined that she wanted to create a work related to nature and water. “In my work, I use time as process and material, as much of my work deals with the passage of time,” she said. “Today, people navigate their lives with obsessive amounts of technology and forget how to be in tune with nature. This installation touches upon some ancient wisdom of time measurement. My work is encouraged to include a sequential or time-based unfolding as visitors navigate through the landscape.”

For many early civilizations, the sun and the phases of the moon were used as time measurement ”devices” because of the scientific understanding of the physical world at that time. As the moon is responsible for the ocean tides, Professor Nagasawa’s goal was to create a work that responds to site-specific ecology, and both metaphorically and poetically narrate the seven phases of the moon and the monthly tidal rhythm of the East River.

This is the second time Professor Nagasawa has been honored by the New York City’s Design Commission. In 2007, she received the award for her public art work, “Timecast,”  a one-mile waterfront project sponsored by the City’s Department of Transportation project, completed in 2012. She has completed nearly 40 international public art commissions.

For more than a decade, Professor Nagasawa has expanded her interest in materials and their sensory properties, in natural phenomena, and human perception. Using light along with the sounds of waves, variations in wind speed, songs of birds, or a human heartbeat as mediums for communication, she involves people in a perceptual experience by creating new environments. Her installations are always personal, driven by her desire to engage with people and with the poetry of the space.

“I create an interactive space that is informed by the physical, natural, social, and historical aspects of the site through people and their spatial narrative,” Professor Nagasawa said. “In this process, I explore the sociological and psychological content of each site in a manner similar to an archeologist or a forensic researcher.  The immediate physical and social context of the site influences the form, content, and choice of materials and media in my work.”

Each year, the City’s Design Commission selects and honors public projects across the five boroughs that exemplify how innovative and thoughtful design can provide New Yorkers with the best possible public spaces and services and create a sense of civic pride. The Design Commission reviews permanent works of architecture, landscape architecture, and art proposed on or over City-owned property. The winning projects are selected from the hundreds of submissions reviewed by the Commission the previous year.

Pending site condition at Hunter’s Point Park, “Luminescence” is expected to be completely installed by end of summer 2017. It will be visible from the Empire State Building, the Chrysler Tower, the United Nations Building and Franklin D. Roosevelt East River Drive (FDR) across the East River.