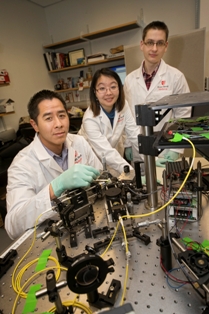 The use of a new brain tumor-targeting contrast agent that differentiates between normal and cancer cells in conjunction with a high-powered microscopy system could potentially lead to a method of more precise neurosurgery for brain tumors, according to research paper published as a cover story in the December issue of Translational Oncology. Developed by researchers in the Department of Biomedical Engineering (BME) at Stony Brook University, the contrast agent adheres to a molecular marker of medulloblastoma, a form of brain cancer, and can be seen by the optical microscope system, also developed by the research team.

Based on the research model, which confirmed cancerous tissue through histopathology, the team discovered that by using the contrast agent in conjunction with laser-scanning 3D microscopy, the optical contrast agent caused tumors to “glow” with fluorescence at each of the tumor margins. The process enabled the research team to define tumor margins, including residual tumor cells.

Their approach may have significant implications in the surgical treatment of medulloblastoma because, the authors explain: “Bulk tumor resection remains the first line of treatment, where it has been shown that the completeness of tumor resection correlates strongly with the survival of patients. The goal of neurosurgeons is to maximize the removal of tumor while minimizing the removal of normal tissues.

“The current gold standard for assessing malignancy is histopathology of biopsied tissue samples. However, this is rarely performed at the tumor margins during resection because of the time required for frozen sections to be prepared and interpreted by a pathologist. Furthermore, histopathology is expensive and requires the removal of brain tissue regardless of the state of the tissue.”

“There is a great need for a noninvasive method to rapidly and accurately visualize residual malignancy to assist surgeons during the tumor resection process, and we think that our research results provides a foundation and approach toward that ultimate goal,” said Dr. Liu, Principal Investigator. “Our chemical probe with utilization of a microscope custom-built to view molecular protein biomarkers in three dimensions identifies tumor margins with accuracy that could potentially approach the gold standard of pathology based on tissue biopsies.”

The authors said that next step in the research is to investigate the ability of the VEGFR-1 fluorescent probe, used in conjunction with their microscope and optical system, to enhance surgical resection in experimental models and ultimately in patients.

“We are also developing miniature microscopes, essentially hand-held devices with the same capability for three-dimensional imaging, which are designed to be an intraoperative guidance for neurosurgery,” explained Dr. Liu.

To further advance this hand-held microscopy and imaging technology, Dr. Liu’s team and colleagues at Memorial Sloan Kettering Cancer Center have received a three-year $2.4 million grant from the National Institute for Dental and Craniofacial Research to develop a miniature hand-held confocal microscope for early detection of oral cancers. Dr. Liu said the technology is based on an advanced confocal architecture to enable high-speed microscopy of tissues and would be similarly developed for a hand-held microscope for neurosurgery.

More broadly, the research team believes that the combination of intraoperative confocal microscopy with molecularly targeted contrast agents has the potential to serve as a valuable complement to current image-guided surgery approaches, such as those with MRI or CT, for resection of brain tumors and other forms of cancer. 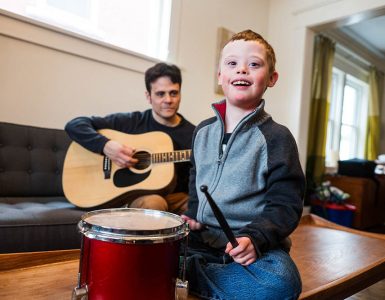 The playwright William Congreve famously observed that “music has charms to sooth a savage breast.” In fact, experts say, music may have much more than charms: There may be an actual scientific connection between music...

A study of ocean acidification by Christopher Gobler, Endowed Chair of Coastal Ecology and Conservation in Stony Brook’s School of Marine and Atmospheric Sciences, is one of eight research projects that will examine...

The work of Stony Brook University’s Ken Dill, Carlos Simmerling and Emiliano Brini has been featured in a Texas Advanced Computing Center (TACC) article, “Protein Storytelling to Address the Pandemic...