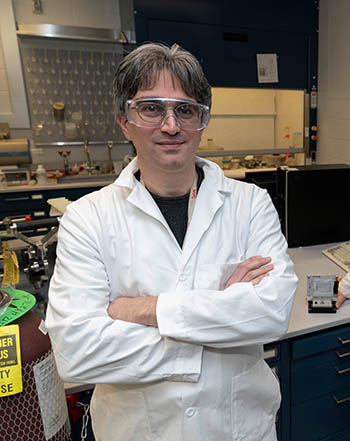 Scientists at Stony Brook University, the U.S. Department of Energy’s Brookhaven National Laboratory, the Materials Project at DOE’s Lawrence Berkeley National Laboratory, the University of California-Berkeley and European collaborators have developed a new way to decipher the atomic-level structure of materials based on data gleaned from ground-up powder samples. They describe their approach and demonstrate its ability to solve the structure of a material that shows promise for shuttling ions through sodium-ion batteries in a paper just published in the journal Chemistry of Materials.

“Our approach combines experiment, theory and modern computational tools to provide the high-quality structural data needed to understand important functional materials, even when only powder samples are available,” said corresponding author Peter Khalifah, who holds a joint appointment at Brookhaven Lab and SBU.

The technique is in some ways a form of reverse engineering. Instead of solving the structure directly from the experimental data measured on the powder sample — a problem too complex to be possible for many materials — it uses computer algorithms to build and evaluate all the plausible structures of a material. By analyzing the “genome” associated with a material in this way, it can be possible to find the correct structure even when this structure is so complex that conventional methods for structure solution fail.

For the study described in the paper, x-ray powder diffraction experiments were performed at the ALBA synchrotron in Barcelona, Spain, by European collaborators Matteo Bianchini and Francois Fauth, part of a team led by Christian Masquelier. Scientists used that facility’s bright x-ray beams to study the atomic arrangement of a sodium-ion battery cathode material known as NVPF at a variety of temperatures ranging from room temperature down to the very low cryogenic temperatures at which atmospheric gases liquefy. This work is necessary because the disorder in the room temperature structure of NVPF disappears when it is cooled to cryogenic temperatures. And while batteries operate near room temperature, deciphering the material’s cryogenic structure is still critically important because only this disorder-free, low-temperature structure can give scientists a clear understanding of the true chemical bonding that is present at room temperature. This chemical bonding environment strongly influences how ions move through the structure at room temperature and thus affects NVPF’s performance as a battery material.

“The bonding environment around sodium atoms — how many neighbors each one has — is essentially the same at low temperature as it is at room temperature,” Khalifah explained, but trying to capture those details at room temperature is like trying to get kids to sit still for a photo. “Everything gets blurred because the ions are moving around too quickly to allow a picture to be taken.” For this reason, some of the bonding environments inferred from the room temperature data are not correct. In contrast, cryogenic temperatures freeze the motion of sodium ions to provide a true picture of the local environment where the sodium ions sit when they’re not moving around.

“As the material is cooled, 24 neighboring sodium ions are each forced to choose one of two possible sites, and their lowest-energy preferred ‘ordering’ pattern can be resolved,” Khalifah said.

A preliminary analysis of the powder x-ray diffraction data by Bianchini indicated that the pattern of ordering is very complex. For materials with such complex orderings, it is not typically possible to solve their three-dimensional atomic structure using powder diffraction data.

“Powder diffraction data gets flattened to one dimension, so a lot of information is lost,” Khalifah said.