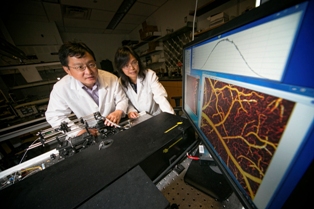 Researchers from the Department of Biomedical Engineering at Stony Brook University have developed a high-resolution, 3D optical Doppler imaging tomography technique that captures the effects of cocaine restricting the blood supply in vessels – including small capillaries – of the brain. The study, reported in Molecular Psychiatry, and with images on the journal’s October 2012 cover, illustrates the first use of the novel neuroimaging technique and provides evidence of cocaine-induced cerebral microischemia, which can cause stroke.

Stroke is one of the most serious medical risks of cocaine abuse. Cerebral blood flow (CBF) is disrupted due to the vasoactive effects of cocaine, and research has shown that the process contributes to stroke in cocaine abusers. An effective treatment has yet to be discovered because of minimal knowledge on the underlying mechanisms that cause cerebrovascular changes resulting from cocaine abuse. Current neuroimaging methods that could reveal clues to underlying mechanisms that cause cocaine-induced restricted CBF, such as magnetic resonance imaging and computed tomography angiography, are limited in scope. The Stony Brook team’s neuroimaging technique offers a promising method to investigate structural changes in the small neurovascular networks of the brain that may be implicated in stroke.

In “Cocaine-induced cortical microischemia in the rodent brain: clinical implications,” the researchers discovered that cocaine administered in doses equivalent to those normally taken by abusers caused constriction in blood vessels that inhibited CBF for varying lengths of time. Brain arteries, veins, and even capillaries, the smallest vessels, were affected by the doses. CBF was markedly decreased within just two-to-three minutes after drug administration. In some vessels, a decrease in CBF reached 70 percent. Recovery time for the vessels varied. Cocaine interrupted CBF in some arteriolar branches for more than 45 minutes. This effect became more pronounced after repeated cocaine administration.

“Our study revealed evidence of cocaine-induced cerebral microischemic changes in multiple experimental models, and we were able to clearly image the process and vasoactive effects at a microvascular level,” said study Principal Investigator Yingtian Pan, PhD, a professor in the Department of Biomedical Engineering. “These clinical changes jeopardize oxygen delivery to cerebral tissue making it vulnerable to ischemia and neuronal death.”

The study reflects the collaborative research of Pan and Co-Principal Investigator Congwu Du, PhD, an associate professor in the Department of Biomedical Engineering, and Nora D. Volkow, MD, director of the National Institutes of Health’s (NIH) National Institute on Drug Abuse. They point out that the types of cocaine-induced microischemic changes that occurred in the brain model are likely a contributor to neurotoxic effects, and they could underlie some of the neurological complications commonly experienced by cocaine abusers. These include various sensory changes, facial paralysis, numbness, and partial to full and irreversible paralysis.

The research was supported, in part, by NIH grants and the National Institute on Alcohol Abuse and Alcoholism Intramural Research Program.