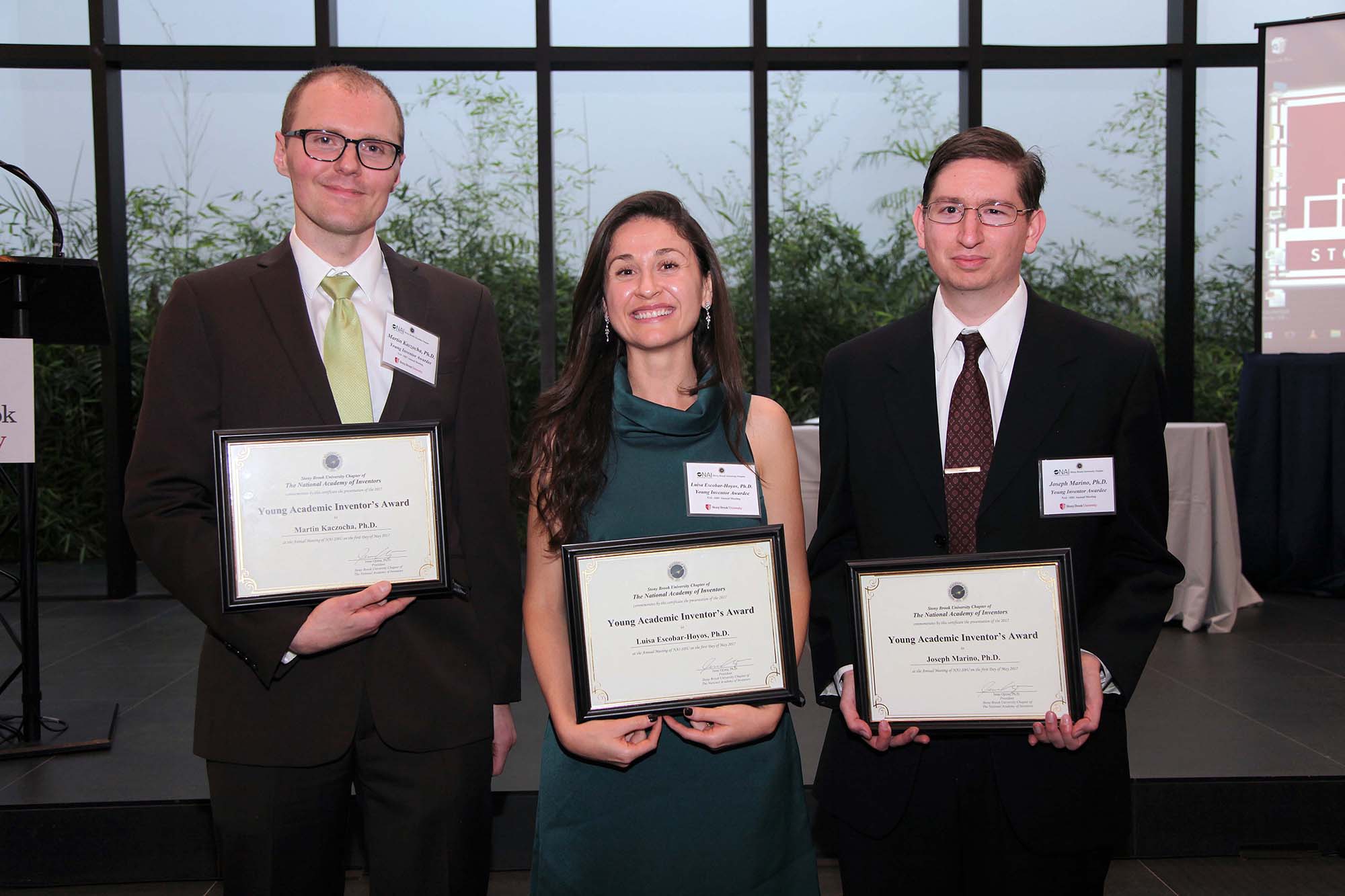 The Stony Brook University Chapter of the National Academy of Inventors (NAI-SBU) held its Annual Meeting at the Charles B. Wang Center on May 1 and inducted 16 new members and 2 honorary members to the Academy. The newly inducted inventors hold patents issued by the U.S. Patent and Trademark Office. With these 16 new members, NAI-SBU now has 50 NAI members, including 6 NAI fellows.

The Annual Meeting
In his opening remarks, NAI-SBU President Iwao Ojima, Distinguished Professor of Chemistry, emphasized that SUNY is ranked 30th in the world for the number of US Utility Patents in 2015, and Stony Brook’s share is more than 90%. He also conveyed a message from NAI President Dr. Paul Sanberg. “On behalf of the Board of Directors of the National Academy of Inventors, congratulations on another productive year of outstanding contributions to academic innovation! Welcome to all returning Stony Brook Chapter of the NAI members and congratulations to the 16 new members and 2 honorary members being inducted today. The NAI is proud to have Stony Brook University, a true innovation powerhouse, as part of our membership.” He certified the inductions and concluded by saying, “Congratulations, and we are honored to have you as members of the NAI and celebrate your accomplishments. It is wonderful to see the Stony Brook University Chapter of the NAI grow, and we look forward to learning of your continued success.”

Following the induction ceremony, NAI Fellow Esther Takeuchi, Distinguished Professor of Materials Science and Chemical Engineering, delivered the keynote lecture, “Innovation: Confluence of Science, Engineering and Application.” She described her highly successful and innovative research endeavor on the development of high-efficiency small butteries with long life for the pacemaker implant and its huge impact on society. This success was based on the confluence of science and engineering, but with clear and meaningful applications in mind. With her experience in industry, she is now leading innovative academic research on new-generation batteries and energy storage. She also pointed out the need for strongly encouraging women in science and engineering to be engaged in inventions since currently only 5% of all inventions are made by women.

“The Stony Brook University chapter of the National Academy of Inventors has a critical role at the University bolstering the importance of our scientist-inventors and cultivating next-generation scientists who have new inventions in mind,” said Stony Brook University President Samuel L. Stanley Jr. “Invention and scholarship are at the core of the University’s mission as one of the top research universities in the world…every day, across the planet, and even beyond, Stony Brook researchers are making discoveries that increase our understanding of science and improve our lives.”

“On the occasion of Stony Brook’s Annual Meeting of the National Academy of Inventors, let me offer my congratulations to all of our researchers and innovators who are being honored tonight,” said Richard Reeder, Interim Vice President for Research at Stony Brook. “These new members being inducted into the National Academy of Inventors have demonstrated the creativity and dedication that drives innovation for the betterment of our society. I especially applaud the recipients of the Young Inventor’s Award, who have shown such a talent at an early stage in their careers. The success of Stony Brook’s inventors reflects the spirit of discovery that exemplifies the University’s research focus.”