Music Department Finds Innovative Ways to Use Sound as Therapy 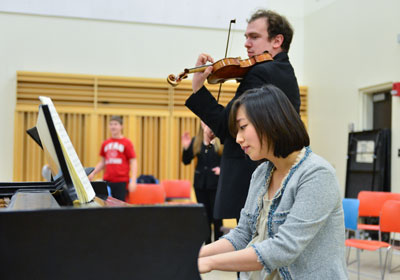 When Yerin Kim, a doctoral candidate in the Department of Music, approached Chair Perry Goldstein about scheduling a concert that children with autism could enjoy, her idea was warmly received.

Goldstein had just had a similar discussion with his colleague Ritch Calvin, an assistant professor in the Department of Cultural Analysis and Theory.

“I really just got the conversation started,” said Calvin, who added that it was his wife, Claudia Tracy, who along with Yerin became the driving force behind the project. Tracy works in the School of Social Welfare for the Youth in Progress program.

“I have been working with gifted students with autism since my undergraduate and graduate studies in piano and psychology, and I thought that it would be nice to create a space and time for kids with autism and their families to enjoy music,” Yerin said.

The final step was to contact Matthew Lerner, an assistant professor of psychology, psychiatry and pediatrics in Stony Brook’s Department of Psychology. Lerner runs the Stony Brook Social Competence and Treatment Lab, which focuses on individuals with autism and their families.

“We all wanted to ensure that people on the autism spectrum would see Stony Brook as a welcoming place,” said Lerner.

More than a dozen undergraduate and graduate Stony Brook students volunteered to serve as support staff at the free event, which took place on April 26 during Autism Awareness Month.

To maximize both comfort and accessibility for the approximately 30 guests, the organizers arranged for the event to take place in two adjacent rooms, one that featured a concert setting and another in which the attendees could interact with the musicians by playing percussion instruments, dancing, coming and going as they pleased.

Eleven of Yerin’s musical colleagues joined her in putting together a diverse program of musical styles and genres. In the storytelling concert, Dan Anastasio, the Via Trio and the Andersen-Deeb Duo played the music of Bach, Brahms, Debussy and Kurtág.

Goldstein called the events “a good start,” noting that these concerts are the latest in a wide array of outreach activities hosted annually by the Department of Music. This includes a Community Music Program that serves very young and more mature children and adults who love playing chamber music, and the department’s more than 300 events, which draw thousands of audience members every year.

In addition, the department collaborates with the Staller Center to send students and faculty to local schools, especially in underserved communities.

“I understand that there are not many concerts at which autistic children are made to feel welcome, so I’m delighted that we are able to provide that opportunity,” Goldstein said, adding that the department intends to host several of these events next year.

The Department of Music is also partnering with the Department of Physical Therapy, within the School of Health Technology and Management’s Rehabilitation Research and Movement Performance (RRAMP) Laboratory.

Jay Loomis ’15, a music composition and history major who will be a Stony Brook graduate student next year, teamed up with Associate Professor and Director of Undergraduate Studies Margaret Schedel, Associate Professor Lisa Muratori and Associate Professor Daniel Weymouth, director of the Consortium for Digital Arts, Culture and Technology, on a research project to examine how music can improve mobility for people with Parkinson’s disease. Muratori presented the findings this month at the 11th International Symposium on Computer Music Multidisciplinary Research in Plymouth, England.

The project involves a process known as sonification, or turning music into specific sounds that give individuals with Parkinson’s the ability to use external cues to self-correct their gait patterns.

“The end goal is to create an application for mobile devices so that whenever people with Parkinson’s go for a walk and listen to their music, if they experience abnormal walking patterns, the music that they’re listening to will become distorted, so they will notice something is awry,” said Loomis.

Loomis said he became interested in this research after working with developmentally disabled adults, some of whom had Parkinson’s.

“If we can create this app, people can use this on a daily basis,” he said. “The hope is that it will help them stay mobile longer and maintain a better quality of life.” 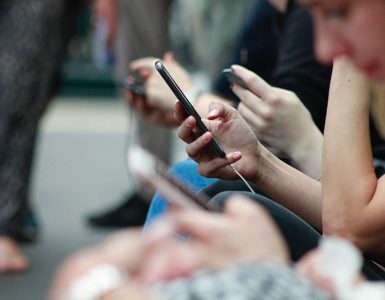 The study findings shed light on how bots behave on social media platforms and interact with genuine accounts, as well as the capabilities of current bot-generation technologies.