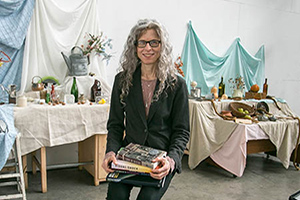 Michele Bogart, a professor in the Department of Art at Stony Brook University, has been named to the 2017-18 Society of Fellows at the Norman Rockwell Museum’s Center for American Visual Studies, the nation’s first research institute dedicated to American illustration.

Established to bring leading thinkers and fresh perspectives to the study of American illustration art between 1850 and the present, the Society of Fellows will explore the history and criticism of this understudied field, to more fully develop the language and discourse of an academic discipline devoted to published art. In addition to scholarly writings, the Society of Fellows will convene twice a year to engage in discussion and debate, posing key questions related to this emerging area of illustration studies.

Professor Bogart has taught art history and American visual culture studies at Stony Brook University since 1982. She is author of Public Sculpture and the Civic Ideal in New York City, 1890-1930 (1989/1997), recipient of the 1991 Charles C. Eldredge Prize; Artists, Advertising, and the Borders of Art (1995); The Politics of Urban Beauty: New York and Its Art Commission (2006), and Sculpture in Gotham: Art and Urban Renewal in New York (2018). She has been a Guggenheim Fellow and Terra Foundation Visiting Professor of American Art at the JFK Institut, Freie Universität von Berlin. From 1999 through 2003 she was Vice President of the Art Commission of the City of New York (since renamed the Public Design Commission), the City’s design review agency, and presently serves on the PDC’s Conservation Advisory Group.