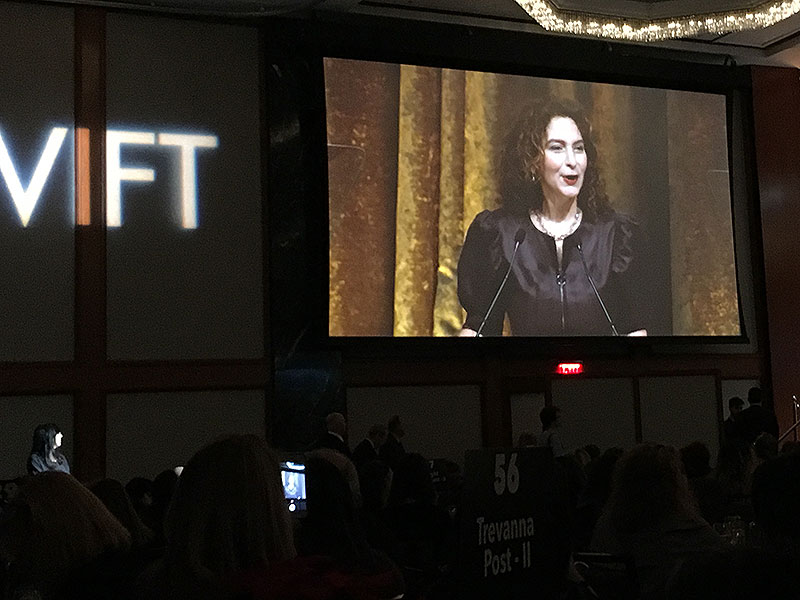 Film producer Simone Pero, a member of the MFA in Film program faculty and a Stony Brook University alumna, delivered the presidential welcome speech at the New York Women in Film and Television’s 38th annual Muse Awards gala on Thursday, Dec. 14, at the Hilton Midtown in New York.

Pero, the president of the NYWIFT, spoke about the year for women in entertainment, one that has been seen a revolution against sexual harrassment in the industry. Lieutenant Governor Kathleen Hochul and Julie Menin, the commissioner of the Mayor’s Office of Media and Entertainment also addressed the gathering, both championing the causes of women in entertainment, New York State productions, and zero tolerance for harassment.

Pero noted that while recent events served as a “stark reminder of the hurdles that remain for women,” 2017 did provide reasons for optimism and signs of progress.

“Television and streaming media shows made bold commitments to hiring women directors for multiple episodes per season,” Pero said in her speech. “Ad agencies declared to stop the bias in their content. And this year we saw box office smash hits with women-centric plots and women of color leads.”

Pero called on everyone — women and men — in film, television and digital media to keep the momentum going. “We have a responsibility now, more than ever, to use our pulpit as storytellers, content-makers and leaders across the industry to move us forward.”

Actors Laura Dern, who stars in The Tale, which was produced by Pero, and Judith Light (Transparent) were among the honorees at the gala. Others honored include Amy Emmerich, Chief Content Officer, Refinery29; Julie Dash, Director (The Nancy Malone Directing Award); Regina K. Scully, Filmmaker and CEO, Artemis Rising Foundation (Loreen Arbus Changemaker Award); and Alysia Reiner, Actor and Producer (Mayor’s Office of Media and Entertainment “Made in New York” Award).

Pero testified that the “numerous high profile public declarations of sexual harassment incidents” is anything but breaking news to the NYWIFT and its membership.

“For us, sexual harassment is ubiquitous,” Pero said. “It happens on film and television location sets, in edit suites and screening cinemas, at client meetings, in corporate board rooms, at trade conventions, business social events, and in office settings. It can range from a subtle unwelcome overture to the most overt offense.”

NYWIFT celebrated its 40th anniversary this year and is the preeminent entertainment industry association for women in New York, advocating for equality in the moving image industry. With more than 2,200 members, both women and men, the NYWIFT recognizes women’s achievements, presents professional development and networking programs, and awards grants and scholarships. NYWIFT is part of a network of 50 Women in Film chapters worldwide.

To mark the 20th anniversary of 9/11, the university created a more accessible Memorial Arch that will help affirm it as a space for quiet reflection. A ceremony will take place on September 10.