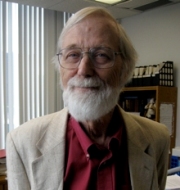 John Milnor, distinguished professor of mathematics and co-director of the Institute for Mathematical Sciences at Stony Brook University, has received the 2020 Lomonosov Gold Medal from the Russian Academy of Sciences “for discovery of non-standard smooth structures on multi-dimensional spheres and for solving fundamental problems of topology and the theory of dynamical systems.”

“I’m so pleased to congratulate John Milnor on his receipt of the Lomonosov Gold Medal,” said Maurie McInnis, president of Stony Brook University. “One of many distinguished honors he has received throughout his career, this prestigious recognition is yet another testament to the impact John has had on the field of mathematics, and his pioneering work that has shaped the mathematical landscape. We are fortunate to have him among our esteemed faculty at Stony Brook.”

“I’m thrilled for John Milnor on his receipt of this extraordinary honor, yet another achievement that recognizes his mathematical prowess,” said Nicole S. Sampson, dean of the College of Arts and Sciences and distinguished professor of Chemistry. “We proudly celebrate the excellence and accomplishments he brings to the College.”

“On behalf of the Department of Mathematics, I offer hearty congratulations to Professor Milnor on receiving yet another award in his extraordinary collection of honors,” said Alexander Kirillov, professor and chair, Department of Mathematics.”One of the greatest living mathematicians, Professor Milnor has made fundamental discoveries in many areas of mathematics, including topology, dynamical systems and algebraic K-theory. He is also known as a master of mathematical exposition; his many books have become standard references for everyone learning mathematics. We are proud to have him as a colleague.”

In 2011 Milnor was awarded the American Mathematical Society’s (AMS) prestigious Steele Prize for Lifetime Achievement and the Norwegian Academy of Science and Letters’ Abel Prize for Mathematics, which is the highest honor a mathematician can receive. He previously won two other Steele Prizes from the AMS, for Mathematical Exposition (2004) and for Seminal Contribution to Research (1982).

Milnor spent his undergraduate and graduate years at Princeton University studying knot theory under the supervision of Ralph Fox. He received an AB and a PhD in mathematics from Princeton. After many years at Princeton and the Institute for Advanced Study, with shorter stays at UCLA and MIT, he settled at Stony Brook. He has studied game theory, differential geometry, algebraic topology, differential topology, quadratic forms and algebraic K-theory.

The Lomonosov Gold Medal — named after Russian scientist and polymath Mikhail Lomonosov — has been awarded each year since 1959 for outstanding achievements in the natural sciences and the humanities by the USSR Academy of Sciences and later the Russian Academy of Sciences. Since 1967, two medals have been awarded annually: one to a Russian and one to a foreign scientist. It is the Academy’s highest accolade.

The team discovered a light symmetry switch that creates the opportunity to carry a dissipationless electron current, which can be useful in wide-scale adoption of quantum computing.