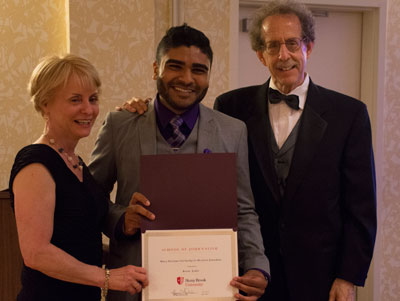 The first Marcy McGinnis Scholarship for Broadcast Journalism was awarded last week to Stony Brook University junior Basil John. The scholarship, endowed by McGinnis, a former Associate Dean of the Journalism School and Senior Vice President of CBS News, is meant to honor and support the efforts of an undergraduate journalism student who excels in broadcast journalism and shows a high level of promise in the field.

“Being the first-ever recipient of the award is a true honor,” John said.

McGinnis has a distinguished career in broadcast journalism. She began working for CBS News as a secretary in the Special Events Unit. Over 35 years, McGinnis rose to become Senior Vice President of news coverage, winning national Emmys for her coverage of Princess Diana’s death, and leading the CBS News team in the coverage of such major news stories as 9/11, the war in Afghanistan and Hurricane Katrina.

“My own broadcast journalism career at CBS News was enormously satisfying and exciting,” McGinnis said. “I hope that this scholarship helps a budding broadcast journalist realize his or her potential in a field that continues to provide a significant public service to tens of millions of news consumers every day.”

In 2006, she left CBS to help establish the Stony Brook School of Journalism, the only journalism school in the SUNY system. She oversaw the construction of the school’s multimedia newsroom and built the broadcast program. McGinnis served as the Associate Dean until 2013.

Howard Schneider, founder and Dean of the School of Journalism, said, “As our first Associate Dean, Marcy was instrumental in creating the school. She continues to mentor many of our graduates, about a dozen of whom are working at CBS News. Now she’s added to that legacy with her endowed scholarship. She’s incredibly committed to our students and to the school’s success. We are very grateful.”

McGinnis recently stepped down from her role as Senior Vice President of Newsgathering at Al Jazeera America. She still returns to the journalism school to mentor and support the growing student body.

John received the award from McGinnis at the annual School of Journalism Awards and Scholarship Banquet.

“Marcy presenting the award to me herself really makes those nights of struggling over my work worth it in the end,” John said. After graduation, he hopes to work his way up to an anchor position at a major news organization.

The $2,000 award will help John and future recipients to continue with their education at Stony Brook and nurture and grow their skills in visual storytelling.

“Basil is a smart, skilled, talented student who is dedicated to pursuing a career in broadcast journalism,” McGinnis said. “I am thrilled to be part of the Stony Brook School of Journalism team helping him to realize his potential.”

In addition to its core undergraduate and graduate program of about 300 majors and minors, Stony Brook’s School of Journalism houses three innovative centers: the Center for News Literacy, which has taught more than 10,000 students how to be more discerning news consumers; the Marie Colvin Center for International Reporting, and the Alan Alda Center for Communicating Science. Students work in a state-of-the-art, multimedia newsroom.