Can hermit crabs teach us about a common global problem – wealth inequality? The answer is yes, according to a first-of-its-kind study published in the January issue of Physica A.

Lead author Ivan Chase, Emeritus Professor of Sociology at Stony Brook University, and his fellow researchers found that the distribution of the empty snail shells in which hermit crabs live was surprisingly similar to the distribution of wealth in human societies. They discovered this by taking a sample of nearly 300 hermit crabs, removing them gently from their shells, and measuring the weights of those shells.

The team used a measure called the Gini coefficient to calculate the amount of inequality in the crabs and found it was similar to that in small-scale human societies such as hunter-gatherers and ancient farming communities.

“The forces that produce wealth inequality in humans are much more complex,” emphasizes Chase. However, he believes that by observing and documenting hermit crab activity with shell distribution and re-distribution, we may gain insights into wealth inequality, and the crabs themselves could serve as a model organism to study this complex and difficult problem in human society.

For more details about the wealth comparison study and the method used by Chase and colleagues, watch this video produced by Stony Brook University student Alyson Hall. 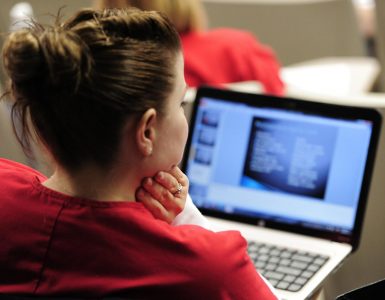 Presentation methods provide students with visual, graphic and other ways to access content, including active engagement with simulated clinical experiences.