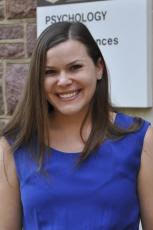 The Association for Psychological Science (APS) has named Dr. Lauren Richmond a 2019 Rising Star, a designation that is presented to outstanding APS members in the earliest stages of their research career post-PhD. Dr. Richmond is one of 76 psychological scientists receiving the award this year.

“Professor Richmond is richly deserving of this recognition by APS,” said Distinguished Professor Arthur Samuels, Department of Psychology. “The work she has done as a graduate student at Temple University and as a postdoc at Washington University has appeared in top journals and is already having an impact on the field. As an expert on memory function, she has focused on the challenges that aging can place on this system and on ways to overcome these challenges. Since her arrival at Stony Brook, she has been a consummate professional, exactly as one would expect of a Rising Star.”

Prior to her position at Stony Brook University, Dr. Richmond held a postdoctoral fellowship in the Psychological and Brain Sciences Department at Washington University in Saint Louis, received her PhD from Temple University, and holds both an MA and BA from Marist College. She has published 16 articles in peer-reviewed journals and has received grants from the National Institutes of Health for her work.

Individuals being considered for the designation of APS Rising Star are evaluated for their promise of excellence in research based on significant publications, recognitions, discoveries, methodological innovations, or theoretical or empirical contributions; and work with a potentially broad impact.

Founded in 1988, APS is a leading international organization dedicated to advancing scientific psychology across disciplinary and geographic borders.