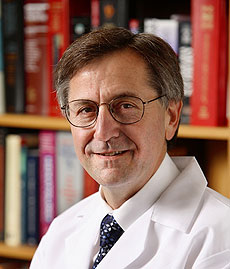 Succeeding Richard N. Fine, who served as Dean since November 2005 and announced his intent to return to practicing medicine in his specialty of pediatric nephrology in July 2009, Kaushansky joins a program poised for growth. With 25 academic departments, 21 residency training programs, and 27 fellowship training programs, and as part of the only academic medical center on Long Island, the School is on a consistent trajectory of increasing enrollment as part of its goal to help meet a growing need for physicians nationwide with 124 men and women enrolled in the class of 2012—the largest incoming class ever. The School is also home to a $4 million, 6,000-square-foot Clinical Skills Center, a state-of-the-art training center where medical students evaluate and diagnose patients through teaching modules that incorporate the use of actor patients, and computerized mannequins that simulate disease.

A leading hematologist, Kaushansky had conducted seminal research on the molecular biology of blood cell production. His team has cloned several of the genes important in the growth and differentiation of blood cells, including thrombopoietin, a key regulator of stem cell and platelet production. He is an accomplished clinician, and he has been a champion of the need to train more physician-scientists who can bridge the gap between the laboratory and the clinical arena, translating research discoveries into improved treatments and technologies for the prevention, diagnosis, and management of disease.

“We are very pleased that we are able to bring one of the leaders in academic medicine to Stony Brook,” said University President Samuel L. Stanley Jr., M.D. “As an administrator, researcher, educator, and clinician, Ken will bridge many specialties as we move toward fulfilling our mission to strengthen existing relationships and forge new ones with researchers on our campuses, at Brookhaven National Lab, and at Cold Spring Harbor Lab.”

“I am absolutely thrilled to join Stony Brook Health Sciences and the University community at large,” said Kaushansky. “For years I have followed the great progress made here on Long Island, and feel it’s the very right time to move the research, education, and clinical missions to a new level. The vision shown by President Stanley and Provost Kaler to help Stony Brook University join the ranks of the world-class universities is something we should all share and aspire to.”