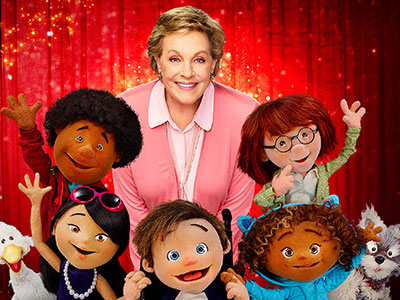 Julie’s Greenroom, produced and written by Southampton Arts faculty member Emma Walton Hamilton and hosted by her mother, Julie Andrews, made its Netflix premiere on March 17, 2017 to great acclaim.

Julie’s Greenroom teaches kids the wonder of the performing arts and the way they enhance our lives. Ms. Julie (played by Julie Andrews, of course) is a theater teacher to five attentive and curious puppet children, a dog, and a duck named Hugo.

Over the course of the 13-episode season, Ms. Julie helps the “Greenies” create a musical. The show was first proposed to the pair by The Jim Henson Company.

Creative collaboration is another theme. Every episode, a mega-talented, art-loving guest visits to teach something new: Alec Baldwin stops by to talk acting, Idina Menzel takes the crew to broadway, Bill Irwin shows how clowning is done, Josh Groban stops for a song, and Sara Bareilles talks about songwriting.

Walton Hamilton and Andrews have together written over 30 children’s books, and Walton Hamilton, the director of Southampton’s Children’s Lit Fellows and the Young Artists and Writers Project, has also written a book for parents about childhood literacy. The pair are tremendous supporters of the arts and recently contributed an article to CNN online in response to President Trump’s proposed budget that cuts all National Endowment for the Arts funding.