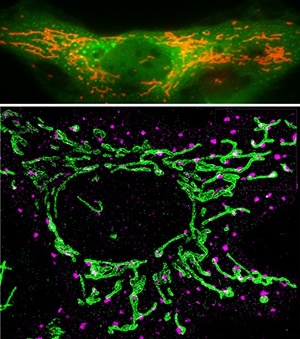 Jarrod French, an assistant professor in the Department of Chemistry at Stony Brook University, has his research, Spatial colocalization and functional link of purinosomes with mitochondria, published in the journal Science. He and his co-authors discovered that a protein superstructure, called the purinosome, spatially and functionally co-localizes with mitochondria.

Purines are molecules that are essential for all life and play many roles in the cell, including acting as one of the building blocks for DNA and RNA. Purines are synthesized in the cell by six enzymes that operate in a purine biosynthetic pathway. Because rapidly dividing cells, such as cancer cells, require large amounts of purines to grow, this pathway is an important target for anti-cancer chemotherapeutics as well as treatments for other diseases.

The purinosome is a newly discovered protein assembly made up of the six enzymes responsible for the biosynthesis of purines. It forms when cellular purine levels are low or in response to certain cellular signals. French and his colleagues provide evidence that these purinosomes physically and functionally associate with mitochondria, membrane-bound organelles that function primarily to generate the energy currency of the cell, ATP.

This multi-disciplinary research project made use of several biochemical and biophysical approaches including a recently developed form of super-resolution microscopy called stochastic optical reconstruction microscopy (STORM). Using this technique, the researchers were able to visualize these important cellular sub-structures at a level of detail that isn’t possible with conventional methods (see figure).

The discovery of the interaction between the mitochondria and the purinosome points to a level of cellular organization and coordination of function between metabolic pathways and organelles that only now is being fully appreciated. In addition, because of the importance of this pathway to the cell’s viability, the discovery suggests a new means of pharmacological intervention for numerous diseases.