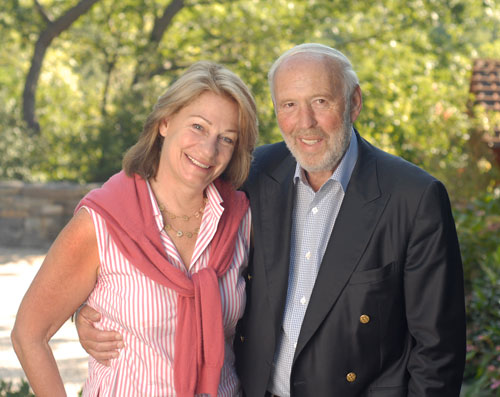 Dr. James Simons and his wife Dr. Marilyn Simons are among a select group to be honored with the 2013 Carnegie Medal of Philanthropy, often described as the “Nobel Prize for philanthropy,” which recognizes those who use their private wealth for public good. The philanthropic activities of this year’s Carnegie medalists span the globe and include support for education, science, entrepreneurship and the arts.

Jim Simons is Board Chair of Renaissance Technologies LLC, Chair of the Simons Foundation and former Chair of Stony Brook University’s Department of Mathematics. He is also the founder and Chair of Math for America, a nonprofit organization with a mission to significantly improve math education in our nation’s public schools. He serves as Trustee of Brookhaven National Laboratory, the Institute for Advanced Study, Rockefeller University and the Mathematical Sciences Research Institute in Berkeley. Marilyn Simons is an alumna of Stony Brook University and President of the Simons Foundation. She has actively championed and worked on behalf of many nonprofit organizations in New York City and on Long Island, and serves as Vice Chair of the Cold Spring Harbor Laboratory Board.

“We are delighted to receive this unexpected honor and look forward to the proceedings in Edinburgh,” said Jim Simons.

Marilyn added, “We feel fortunate to be in a position where we can give back — and giving back in a way that is interesting and meaningful. What we receive in return seems to be so much more than what we give.”

In 2011 Jim and Marilyn Simons and the Simons Foundation gave an historic $150 million gift to Stony Brook University, which was the largest donation in SUNY history and among the top ten gifts to public higher education in America. The investment targets research excellence in the School of Medicine — foremost is the development of a Medical and Research Translation (MART) building, faculty hires through new endowed professorships across academic disciplines, and recruitment of top-level graduate and undergraduate students.

The Simons family and the Simons Foundation have provided more than $300 million in contributions to Stony Brook during the past 20 years to support a number of academic initiatives, including the Simons Center for Geometry and Physics, which was established with a $60 million gift in 2008. Other contributions from the Simons and their Foundation have benefited summer high school mentoring programs, summer institutes on string theory, workshops and a lecture series related to math and physics.

“Jim and Marilyn Simons are by far the most generous, visionary and engaged philanthropists I have ever had the privilege to know,” said Stony Brook President Samuel L. Stanley Jr., MD. “The impact of their generosity on Stony Brook University is absolutely transformational. Their work to advance research in mathematics and the physical sciences, in life sciences and in autism has had a profound impact on people’s lives.”

The Carnegie Medal was established in 2001 to mark the centennial of Andrew Carnegie’s retirement from business and the beginning of his efforts to reinvest his wealth in a way that would “do real and permanent good in this world.”

The 2013 winners will receive their medals at a ceremony held at the Scottish Parliament in Edinburgh on October 17. Now in its 12th year, this is only the second time the ceremony has been held outside the United States, both times in Scotland, having been last hosted by the Scottish Parliament in 2005. This year’s event also marks the centennial of the establishment of the Carnegie UK Trust.

Medalists are chosen by an international selection committee of representatives from six major Carnegie institutions.