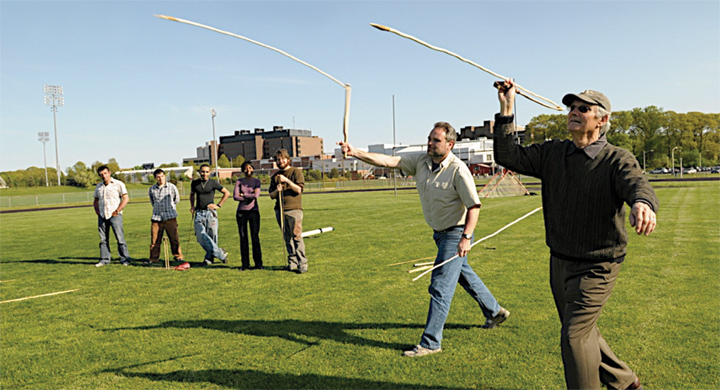 “I’m trying to find out what makes me unique,” says Alan Alda at the start of a three-part series, The Human Spark, which also features Stony Brook’s John Shea and Veronica Waweru. The series broadcasts on PBS January 6, 13, and 20 at 8:00 pm (check local listings).

“And when I say me,” Alda continues, “I don’t mean just me. I mean you, too. We’re pretty sure that something sets us apart from all the other living things on Earth. There’s us, and then there are the other animals. Well, if that’s true, what is it that makes us different? We’re calling it the human spark.”

In the series Alda visits with scientists on three continents and participates directly in many experiments. He has face-to-face conversations with leading researchers seeking the Human Spark, from archeologists finding clues in the fossilized bones and tools of our ancestors; to primatologists studying our nearest living relatives to explore what we have in common and what sets us apart; to neuroscientists peering into his mind with the latest brain scanning technologies.

Alda has an on-campus visit with Shea, Professor in the Department of Anthropology, for a lesson on primitive technology. Shea was chosen for the program because of his unique stone-toolmaking skills. He is a first-rank flintknapper (maker of stone tools like the hand axes our forebears created from flint), renowned throughout the world in his field and one of the pre-eminent stone toolmakers living. For Shea’s students, flintknapping is meant to elevate their awareness of stone tools so they won’t fail to notice one at an archaeological dig. On the show, Shea shows Alda how to throw a spear, craft a stone axe, and make a soapstone bead.

A colleague of Shea, Waweru is a postdoctoral fellow at Stony Brook and at the University’s Turkana Basin Institute in Kenya. She’s an expert on projectile technology, and her experiments are beginning to show that bow and arrow use in Africa goes back thousands of years further than scientists had previously demonstrated.

The Human Spark is a co-production of Chedd-Angier-Lewis Productions and THIRTEEN in association with WNET.ORG.