The Humanities Institute at Stony Brook (HISB) is hosting a groundbreaking conference this September that will bring together scholars and filmmakers from around the world to investigate the politics, aesthetics and economics of women’s cinema, focusing on the ways this cinema engages contemporary scenarios of global change. “Global Women’s Cinema: Transnational Contexts, Cultural Difference and Gendered Scenarios,” will be held September 18 through September 20 at the Humanities Institute (Room 1008) and at the Hilton Garden Inn.

The conference is part of an international collaboration that began with the inaugural conference in May 2013 at the Università degli Studi Tre in Rome.

“With our counterparts at the University of Rome, we are further developing a project to investigate the politics and forms of contemporary global women’s cinema from 1990 to the present,” said E. Ann Kaplan, Distinguished Professor of English and Cultural Analysis and Theory, also past director of the HISB and past president, The Society for Cinema and Media Studies, who helped organize the Rome conference. “The participants — from Argentina, Australia, Canada, China, Germany, Greece, India, Iran, Italy, New Zealand, South Korea, Turkey and the United States — will continue to discuss the group’s ongoing research on the multifarious ways in which women’s cinema engages the contemporary scenarios of global change.”

The HISB conference is a follow-up event, organized by Kaplan with her colleagues, Adrián Pérez-Melgosa and Kathleen Vernon, both professors in the Department of Hispanic Languages and Literature. “This is a unique opportunity to see and hear about essential international films that are rarely shown in main-stream theaters and media outlets,” said Professor Pérez-Melgosa.

Film screenings, with a colloquium with the film directors, will be held each evening in the Charles B. Wang Center Theater:

“We envisage developing this work through future conferences in other nations, such as Canada (Concordia University), Turkey (Kadir Has University) and Argentina (Universidad de San Andrés),” said Kaplan.

The event is co-sponsored by The Provost’s Office, College of Arts and Sciences, and the Department of Hispanic Languages and Literature. 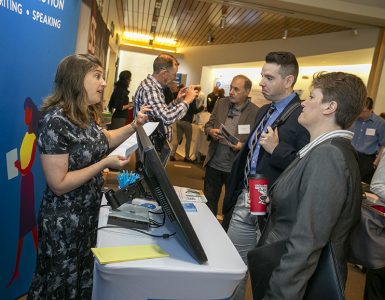