Fotis Sotiropoulos, Dean of the College of Engineering and Applied Sciences at Stony Brook University, has co-authored a chapter in the newly released publication After Shock, a collection of essays in which the “world’s foremost futurists reflect on 50 years of Future Shock and look ahead to the next 50.”

After Shock marks the 50th anniversary of Future Shock, the influential 1970 bestseller by futurists Alvin and Heidi Toffler who described an emerging global civilization and predicted changes in tomorrow’s family life and the rise of new businesses, subcultures, life-styles, and human relationships. Future Shock sold over 6 million copies and inspired a documentary released two years later, narrated by Orson Welles.

Dean Sotiropoulos’ chapter is co-authored with Terrence Sejnowski, author of The Deep Learning Revolution and widely considered one of the fathers of machine learning and neural networks. Entitled “Artificial Intelligence Shock,” the chapter addresses the future of education in the AI era and the need for a National Defense Digital Education Act to compete in the global AI race. Dean Sotiropoulos and Professor Sejnowski highlight the growing demand for a new paradigm in education to prepare students to work in the AI-driven economy of the future:

“The role that higher education institutions need to play in this new era of intelligent machines cannot be overstated. Educational paradigms must be established that prepare students to work and creatively co-exist with AI systems by cultivating higher-order human cognitive abilities, which are less likely to be soon surpassed. These include critical thinking, the ability to work with complex interconnected systems, entrepreneurship, compassion and cross-cultural understanding.”

At Stony Brook Dean Sotiropoulos leads University-wide initiatives in Artificial Intelligence. In 2019 the Institute for AI-Driven Discovery and Innovation at Stony Brook University was launched to serve as an intellectual hub to coordinate and encourage faculty AI research and educational initiatives across the University and beyond.

After Shock is on sale beginning February 4, 2020, and can be purchased on Amazon and anywhere books are sold.

Read more on the College of Engineering and Applied Sciences website.

The SoMAS professor is an expert on disaster resilience, and finds that Stony Brook provides her with many opportunities for multidisciplinary collaboration. 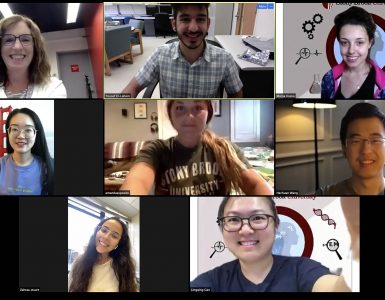 WISE teamed up with Electrical and Computer Engineering and iCREATE to provide kids with a virtual platform to express their inner engineer and STEM creativity.