Environmentalists of the Year Award Inaugurated at Earthstock 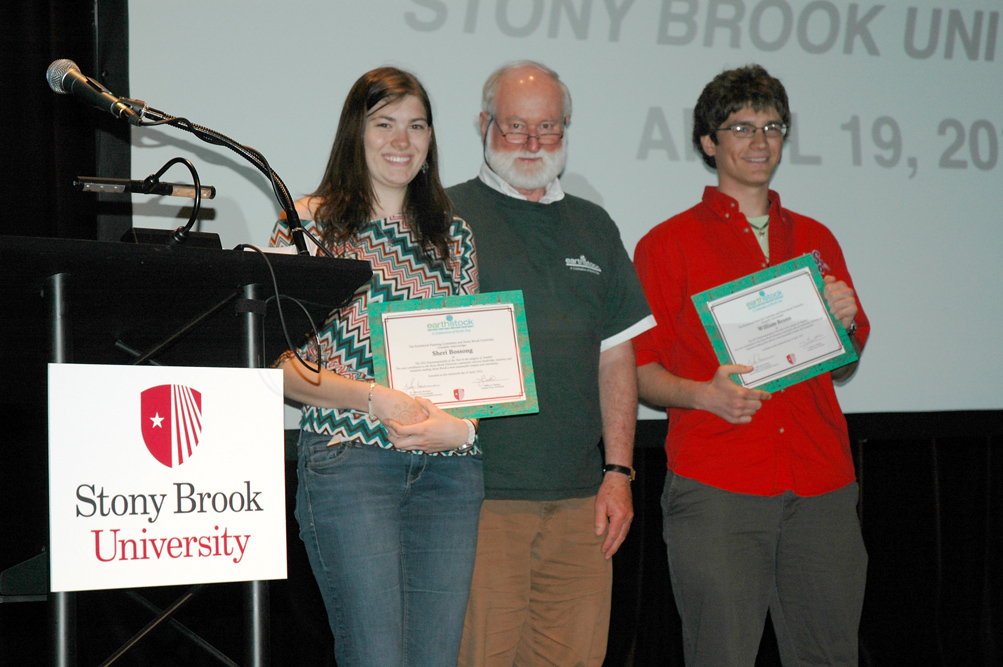 The Earthstock Festival at Stony Brook University added a tradition in 2013 — honoring individuals who have made the greatest impact on protecting the environment — locally, regionally and nationally.  Two students and one faculty member were the recipients of the first-ever Environmentalists of the Year awards on Friday, April 19, at the Charles B. Wang Center.

The awards were presented just before Professor Jeffrey Levinton, Distinguished Professor in the Department of Ecology and Evolution at Stony Brook, delivered the opening remarks for Earthstock keynote lecturer and climate change pioneer Professor Wallace Broecker of Columbia University.

Malcolm Bowman, Distinguished Service Professor of oceanography at Stony Brook and Earthstock academic co-chair, was surprised to learn he was one of the award recipients.

Bowman had no sooner bestowed awards on SBU Environmental Club President Sheri Bossong, an engineering science major from Hicksville, New York, and Environmental Club Secretary William Bruno, a coastal environmental studies major, from Ridgefield, Connecticut — both from the class of 2014 — when Alexandra Santiago, an environmental studies major, class of 2013, from Rocky Point, New York, presented Professor Bowman with the faculty award. Bowman, a native of New Zealand, teaches physical oceanography and is a world authority on storm surges.

“While he has been a go-to expert for knowledge about post-Sandy solutions, oceanography and climate change, this year’s awardee has held a special place in the heart of the Stony Brook community during the past 40 years,” Santiago said.

Bowman joined the Marine Sciences Research Center in 1971 and has taken the lead on the Stony Brook Storm Surge Research Group, whose current research centers on prediction and modeling of storm surges that threaten the New York Metropolitan and Long Island areas.

“He encourages those around him to think critically about the environment and challenges students to take action in their futures,” said Santiago.

Prior to receiving his award, Bowman had honored Bossong as one of the student Environmentalists of the Year. He recounted how Bossong had spent last summer conducting research on self-cleaning solar panels coatings to make them more commercially viable. This summer Bossong will continue her research in Finland.

Bowman also praised the second student award recipient, Bruno, for creating sustainable programs and initiatives to teach the surrounding community. One such program was “Stuff Swap,” which Bruno began in his residence hall. He showed his hall council members, who represent the legislative voice of the residence hall, that what they might think of as trash could actually be used for others’ benefit.